the tides of london

i was surprised this weekend to discover how severely the river thames in london rises and falls with the tides... 5-7 meters!! 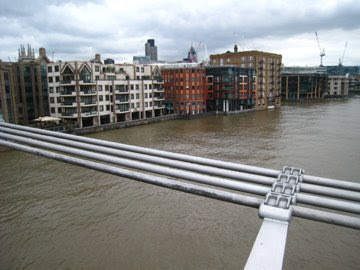 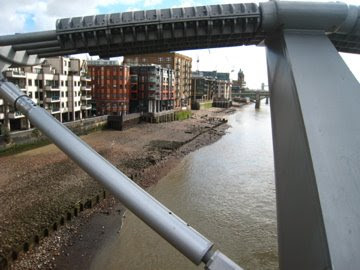 water feels the effect more than rock since it is more flexible. the earth rotates fully each day, so the bulged water parts that face towards and away from the moon, are changing as the earth rotates, and we witness the rise and fall of the earth's oceans (among other things). there are two tides each day as each part of the earth's surface rotates thru each bulged part.

the sun also plays this tidal game with the earth. the sun causes similar tides on earth, but they are half as strong as lunar tides since the moon is much much much closer! when the sun, earth, and moon are aligned, the effects of the tides from the sun and the moon add together and cause higher high tides and lower low tides. we call these spring tides and they occur twice a month (at the full moon and new moon phases).

the weakest tides occur when the moon is at a right angle from the sun, relative to the earth. in this case, the solar and lunar tides act in opposite directions and slightly cancel each other out. these are called neap tides and occur at the 1st and 3rd quarter phases of the moon. i dont know where the word "neap" came from.

i've seen tidal effects on oceans, but i dont remember previously witnessing such strong tides in a river! cool!

the shots of the tides i showed above were taken from the millenium bridge... 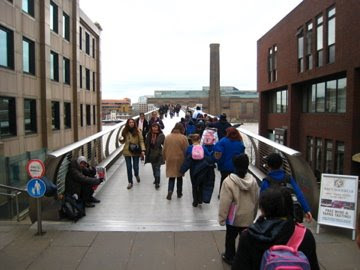 ... which connects the tate modern museum (seen here on the other side of ruth)... 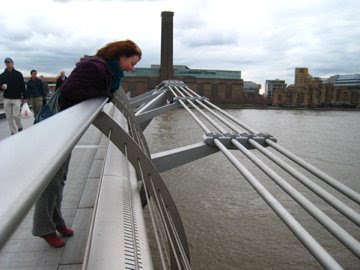 ... and st. pauls cathedral (seen here from inside the tate modern!). 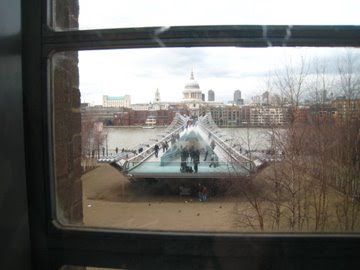 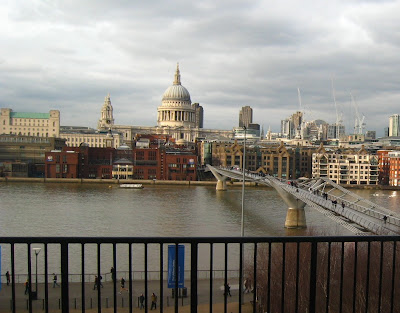 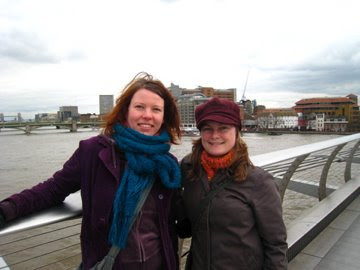 Go to my hometown of Newport, Wales. And look at the river Usk throughout the day (it runs through the middle of town). It drops absurd amount!! (It also reveals some interesting things at low tide)

yeah, we referred to the things revealed at low tide as "london's intestines."

That's really interesting! I had never thought about tides affecting rivers before. Thanks for the time lapse!

Fascinating stuff. I love it when you do these kinds of posts.

I really had to think about the “Earth-Moon center of rotation”, explained on the Proudman site.

So, my understanding is Earth and Moon wobble together as Earth orbits the Sun. Earth does not sail smoothly and evenly. The Earth and moon together as one, spin around their (combined) gravitational center. Which, is not on Earth’s axis, so Earth wobbles. Then, the equal force on the far side of the ‘center of rotation’ explains the far-side tide.

The far-side tide never made sense until I got my head around this. Cool!

U should do the following Goog searches before the next trip to London "Boudicca statue" "dover st woman" "thomas brock Angel of Justice".

Nice explanation and pictures of england..
In my country, most of time the river is on low tide...once it reaches high tide then flood will follow on the next day..

wow, this tide thing is amazing. I've always underestimated those things on my trips abroad. I'll surly check it out in my visit to London, hopefully that the moon will be in my side!

Hi,
I randomly came on this side and would like to leave nice greetings. I would be glad if you visit my homepage also! Maybe you want to visit Sylt Westerland in Germany or the Baltic Sea for vacation?! We have there very nice flats with a nice view. Maybe we'll see soon!
Kind regards

Beautiful pictures, I love London so much...

wow very nice pictures. one time when i have enough money, i want definately visit London!