sita sings the blues is a full-length animated film that was just released with a creative commons license. the animation, by self-taught comic artist nina paley, is very unique and interesting throughout. a couple stories with the same theme are told in parallel, while several themes surrounding a single story are expressed thru different types of animation. 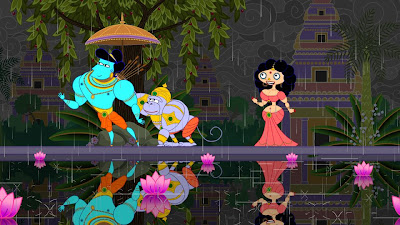 Sita is a goddess separated from her beloved Lord and husband Rama. Nina [Paley] is an animator whose husband moves to India, then dumps her by email. Three hilarious shadow puppets narrate both ancient tragedy and modern comedy in this beautifully animated interpretation of the Indian epic Ramayana. Set to the 1920’s jazz vocals of Annette Hanshaw, Sita Sings the Blues earns its tagline as “The Greatest Break-Up Story Ever Told.”

i loved this. thanks for sharing. don't know how i found the time to watch it but i got hooked and couldn't stop!!!