as i mentioned before, the kepler space craft is prepped and ready for launch tonight at precisely 10:49:57 p.m. EST (on March 6, 2009)!! you can watch the launch online from nasa tv!! one day, i really hope to witness a night launch in person....

kepler's mission is to detect earth-size planets around distant stars. this is the first telescope with the capabilities to find such small planets using the transit method. if a planet happens to pass in front of its star, it blocks a tiny amount of light output from the star. sensitive telescopes can detect this dip in the light from the star and then we can attempt to model how big the planet must be! 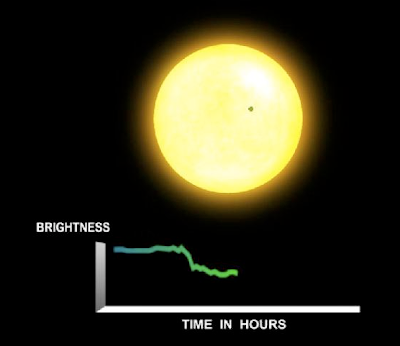 the graph above slightly exaggerates the dip in signal, but you can see that it does exist. after the planet passes in front of the star, the signal from the star remains constant while the planet continues on its orbit all the way around the other side of the star and back.

here's an image of mercury transiting in front of our sun - you can see how tiny it looks even from our close view from the earth!! 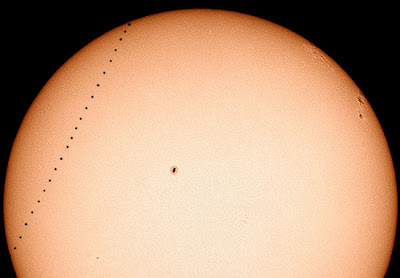 such a tiny planet is still impossible for us to detect around distant stars. but you can imagine that we will be able to find bigger planets more easily!!

"The Kepler spacecraft will watch a patch of space for 3.5 years or more for signs of Earth-sized planets moving around stars similar to the sun. The patch that Kepler will watch contains about 100,000 stars like the sun. Using special detectors similar to those used in digital cameras, Kepler will look for slight dimming in the stars as planets pass between the star and Kepler. The Kepler's place in space will allow it to watch the same stars constantly throughout its mission, something observatories like Hubble cannot do." 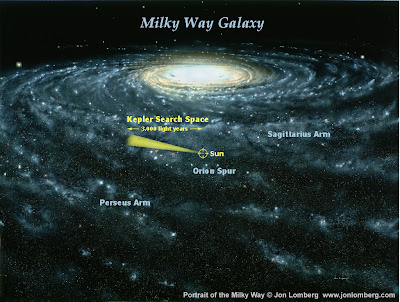 congrats on being blog of note

Great info. If we can identify likely earth-like planets, it will help us narrow down the focus of our space program. We can expand our reach within our own solar system, (by setting up Moon and Mars colonies, and more!) while establishing our galactic creds in others.

I enjoyed reading your blog, and also got some great ideas about making mine more interesting.