i'm still in brasil, but heading home to la serena tomorrow. it's been a fun and humid trip... many more details later along with more regular posts again!

i wanted to take a minute to point out, again, my new favorite blog... cosmic variance! the contributers have been discussing many interesting issues... the best of which are easily digestible physics and astronomy blogs! i'm happy to admit that i've had very fun and enlightening discussions over beers at conferences with a few of the contributors and i'm so delighted to have the opportunity to read more of their thoughts on things ad stuff.

today i start my first big trip in south america.... off to visit an old college friend, paulo, in sao paulo, brazil! i take an overnight bus to santiago, then fly to sao paulo then i think we're taking another bus straight to the beach!

heehee! i'm so excited!
No comments:

i tried to write something up the other day regarding the recent "debate" on CNN about atheism. i was/am extremely disappointed by CNN's one-sided approach and confused by the panelists' notion that human morality can only be derived from religious foundations.

CNN received so much negative feedback about their reporting that paula zahn later invited the well-known atheist, richard dawkins, on the show for an interview.

i was pleasantly surprised by how well he answered her questions and responded to her claims. he can be a bit strong for my flavor of debate, but i think i understand why he does it.... as i said, i tried to write about it and failed. it turns out that my idea involves the potential to shift the range of acceptable political debate, encompassed by the overton window. i had never heard of this term, or even the concept until i read this great post at cosmicvariance.com. check it out. it's excellent and recommended!

happy darwin day!! not only is today the birthday of my lovely older sister... it's the day charles darwin was born, 198 years ago! he also published "On The Origin of Species" on this day 148 years ago.

"The objective of Darwin Day Celebration is to encourage existing institutions worldwide, such as municipalities, public and private schools, colleges and universities, libraries, museums, churches, private organizations and individuals to celebrate Science and Humanity every year, on, or near, February 12."

so.... here's a video, by the eloquent carl sagan, explaining the theory of evolution (7:55) 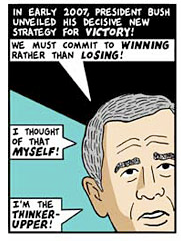 i dont read it every week, but i really enjoy the comic this modern world. i happened to see this morning's comic and the first panel made me laugh out loud! you can read the full comic by going to salon.com getting the free day pass.


maybe i could use that phrase for my PhD defense...

the beautiful ringed planet saturn will be passing very close by tomorrow night (saturday, feb 10)... when it reaches opposition. this is when the sun, earth and saturn line up with earth in the middle... constituting saturn's closest approach to us on earth! look to the east at sunset where saturn will be pretty bright. the bright star, regulus, will be below and a little to the left of saturn.

maybe it shouldnt surprise me so much, but it does... it's a hummer driving thru the crowded streets of baghdad.

over the last couple weeks, i have been reading several reports declaring dangerous amounts of earth-orbiting space debris... nuts and bolts, spent rocket stages, gloves, cameras, satellites, etc... monitors of these synthetic pieces of waste have found over 10,000 objects, detectable if they are at least 4 inches wide. this debris travels at roughly 25,000 miles/hour around earth at altitudes of hundreds or thousands of miles.

the increased amount of worry seems to stem from china's recent anti-satellite test. china's former satellite broke into roughly 1000 pieces when it was hit. the density and high relative velocities of these pieces creates risk because some pieces will inevitably crash into other pieces, potentially destroying active satellites. when most small pieces of debris fall thru earth's atmosphere toward the surface, a pocket of condensed air forms in front of the object, the condensed air heats up and then the object vaporizes. it is believed that the majority of meteroids are actually small (less than 1 mm) debris pieces ! more massive objects will survive re-entry and crash into earth. luckily, most of earth's surface is water and much of the land mass in uninhabited, but this still poses danger to life. the aerospace corporation has been monitoring debris levels since 1960 and they give and intersting list of ideas to reduce the risk of space debris.

Space Junk, Once a Nuisance, Is Now a Threat [NYT]

another worry that i have is that china's test might fuel military tensions between nations with space-based technologies and absolutely no need for new reasons for conflict. i'll refer you to a press release by the union of concerned scientists if you wish to read more abou that...
No comments:

i'll admit that i've never been a big fan of american football, and i still have problems calling the game "football," but i've definitely softened up over the last couple years. i mean, how can i not like a good superbowl party?

this year i watched the game with ex-pat astronomers and their families in chile. the feed from the US was a bit shotty so there were several excitable moments... like after the first run where the bears scored a touchdown, a couple fumbles happened, and then the colts had the ball and... zztt.. frozen tv... we all joked a little.. and then BAM... the picture is moving with harrison is running across the goal line! what!?!? haha!

due to the midwest dominated game, i felt inclined to bring a chilean version of my favorite cincinnati chili dip. mmmm... love that stuff! we had the popular indy broasted pork sandwiches, and one woman even brought a genuine bears crockpot!

unfortunately, we couldnt see the infamously expensive commercials, but we did get to see the same chilean sports commercials over and over and over, including one advertisement for american NFL teams playing games this summer in china. huh?

anyway, this season i missed enjoying some yummy etouffe and gumbo with the most entertaining football fans i've met... cajuns cheering on the saints! but i happily got to watch one good game in austin and one good saints game in chile. i'm looking forward to seeing the saints kick more butt next year! go saints!
No comments:

molly ivins died last night... from breast cancer. she has long been one of my favorite columnists. her wit and wisdom and unfailing directness has inspired me for many years! she never lets anyone get away with anything and understands the responsibility that we each hold in this institution. she has always inspired me to not sit back, but get up, get out, speak my mind and *do* something about what i believe! i will miss her voice.

here's a quote from her last column, stand up against the surge:

"We are the people who run this country. We are the deciders. And every single day, every single one of us needs to step outside and take some action to help stop this war. Raise hell. Think of something to make the ridiculous look ridiculous. Make our troops know were for them and trying to get them out of there. Hit the streets to protest Bushs proposed surge."


who needs breasts, anyway? [molly ivins... essay on her cancer]