i sat in amazement at the brightness of the full moon two nights ago as my crisp moonshadow followed me around my neighborhood. it was the last full moon i'll see in chile during this trip. i'll be watching over the next two weeks as the slivers of light fade each night and the full moon dims to new. the dark sky of the nearly new moon this august will accompany the perseid meteor shower... at least for those of you in the north.
No comments:

UPDATE: oops, the pictures below are messed up, but i have no time to fix them now. in the mean time, you can see the full set here.


after an unexpected day in lima, a full day in cusco and the long day train trip to machu picchu, eric and i set out on our 5-day trek to the ruins of choquequirao.

i tried to book a trek along the inca trail to end at machu picchu, but there are a limited number of people allowed on the trail in any single day and all the tours were booked three months before july when i originally called!! so i opted to do one of the "alternative treks" that went to choquequirao...the other machu picchu.

we took a shuttle to the tiny valley town of cachora and began the 5 day adventure!

onward... to the steep mountains!

a gringa ready for anything.

near the top right of this picture you can see some of the ruins of choquequirao...

we hiked down into the valley, across the river, and abruptly climbed up the other side to explore the ruins on day 3 of the trek.

porters from our departure town in the valley and mules carried all our stuff (thankfully!! the trek was hard enough without lugging more than water!).

happy trekkers at the top of the steepest climb!

mate de coca and a fruit whose name i cannot remember. i drank A LOT of coca tea on this trek and loved every cup of it!

a typical scene with eric...

on day 3 we explored the ruins. they are much more spread out than at machu picchu so we made some real climbs to get all over the mountain face to see them. it's estimated that only 30% of all the ruins here have been uncovered from the victorious jungle.

there are no roads leading to choquequirao, which is a very good thing in my opinion. part of my amazement of the place is how isolated it is and how hidden. you can barely make out any structure until you are right at the ruins! the river that passes thru the valley leads to the amazon jungle and a 9 day trek from choquequirao takes one to machu picchu.

in the room where mummies are stored...

the tree in the the courtyard.

not so much stylin', but definitely comfortable!

nature always wins. one of the best parts of this trek was seeing structures as they were when explorers found them (i imagine after they were tipped off by farmers...). they clean off the stones and rebuild the walls, hoping to emulate the original work. it's amazing that they find these buried treasures at all after the jungle lives its life for hundreds of years!

the llama terraces... in my opinion, the coolest thing the incas made!!! the contrast is created using two types of rocks. the gray stones are stacked in an un-typical vertical fashion with gigantic chunks of white granite stone creating the llamas. the granite was presumably dragged up the mountain from the river!

notice the diagonal "short-cut steps" built into the walls so you dont have to walk all the way down to the end to get to the next terrace!

less dense and more spread out than machu picchu, but ultimately bigger.... here's the view from the look out field that felt like a helicopter pad!!

pieces of incan pottery... people found them and left them stacked along one wall for the rest of us to see and share.

steep terraces used to farm maize and many different types of potatoes.

so steep... based on the doorways and roof heights of the structures i saw, the incans were on average a decent bit shorter than i am and i had a super hard time climbing up the horrendously steep stairs between the terraces!

our fantastic team of porters, cooks and our guide, alex!

there are probably hundreds of travel groups in cusco, peru, but i definitely recommend the the Q'ente tour operator!

its a fascinating experience to climb around and explore the secret world of the incas. their creative and brilliant engineering techniques flourished since they had no pressing need to develop weapons for self-defense. i felt like an awe-struck kid walking around the ancient playgrounds of machu picchu and choquequirao, discovering all the ingenious little details that the incas built into their homes and farming structures. it's endlessly amazing what people can do!

i never tire of hearing carl sagan's voice or his infinite wisdom. here's a ~5 min excerpt from the Cosmos: a personal voyage series. he relates the history of the universe to a modern day calendar to present perspective on how long humans have existed.

the simpsons movie came out today at the movie theatre in la serena.... i really want to see it, but it's dubbed in spanish!! aaahhhhh! i guess this shouldnt surprise me as my friend, eva, has told me before... after growing up listening to the simpsons dubbed into spanish, it's weird to hear the characters with their english speaking voices! ugh... maybe i'll go and see it to test how much i can understand then watch it again when i get back to the states!!

its a busy week. i'm trying to finish up a paper before i leave chile in addition to completing the project that brought me down here. the latter will be a slightly difficult task, as the instrument, FLAMINGOS2, is *still* in florida... but i'll do my best to organize the future observations.

here's a preview from last weekends trip to the see the volcanos of the atacama desert. i want to share the rest of my peru pictures before i just to these, but here's a teaser! i absolutely loved the brilliant yellow of the plants! 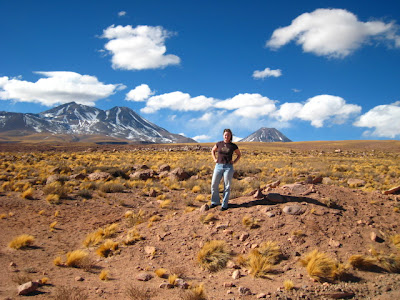 also, i noticed the moon close to a bright jupiter in the sky last night! it's passing through scorpius. here's a view from the northern hemisphere with the moon a few times bigger than it actually looks on the sky, for clarity!

back from the dry

the atacama desert in northern chile is the second driest in the world... we actually pointed out to each other when we saw plants because they seemed so unusual in the stark landscape. pop quiz... what's the driest desert in the world??

i've returned from the northern desert to realize that i have only TWO weeks left in la serena, chile!! holy crap how time flies as little moments simultaneously linger in my mind! so much to say, so much to do, so much to see, so much to feel...
2 comments:

one last adventure before i leave chile... rachel, rodrigo and i leave bright and early tomorrow morning to drive to the northern deserts around the city of san pedro de atacama... to see the valley of the moon, flamingoes, salt lakes, volcanos and who knows what else!!

i cant believe i leave chile so soon!!
1 comment: