well it seems that my prediction was wrong and pluto is now a "dwarf planet!" according to the IAU, we have 8 planets in our solar system.

it's good to see the scientific process open to the public and i'm glad we finally have a working definition of a planet.
No comments:

astronomers are busy in prague voting on their proposed new and finally official definition of a planet. we've identified 9 planets in our solar system in the past: mercury, venus, earth, mars, jupiter, saturn, uranus, neptune and pluto (my very fine mother just sent us nine pizzas!). the first planet was identified over 200 years ago as an object that moved across the sky in a different way than the stagnant distant points of light... the stars. no formal definition of a planet currently exists.

the proposed definition is that in order for a celestial object to be a "planet" it must:
1) orbit around a star, but not actually be a star (a star is an object that burns at least hydrogen in its interior)
2) and be made up of enough stuff (mass) that its own gravity pulls it together to be nearly spherical.

roughly, an object less than 1% the mass of our moon within a diameter way less than the length of california could satisfy the second point. so.... we could wake up soon in a solar system containing 12 planets? if the new definition gets voted in.... we would add ceres between mars and jupiter, keep pluto, throw in pluto's moon charon, and the unromantically named 2003 UB313.

i think there are some ambiguities that still plague the nearly new definition of a planet. for instance, pluto's orbit around the sun is not in the same plane as the other currently existing 8 planets and pluto's orbit is more eccentric (less circular) than the other planets. also, there are objects out there that arent officially stars because they dont burn hydrogen in their cores, called brown dwarfs, but they are 12-75 times bigger than juptier-like giant planets and they dont orbit around other stars. do we need another name for objects that are bigger than juptier, but smaller than brown dwarfs and are not orbiting around stars?

i dont think any of those names are clever enough to stick..... any ideas??
2 comments:

i've decided bring my ongoing, self formatted, moved away from my family so i'll keep them updated webpage, to a different realm.... the bona fide blog-o-sphere.

hopefully, i'll find a compatible photo sharing software as well so i can share pictures up my upcoming journeys to germany and chile.

i leave for munich in 2 weeks. rob and i had a fantastic going away party last nigh 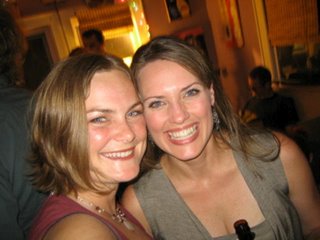 t... 50 ways to leave your lover. the pictures shows the amandas.... me all chi-ed up with rob's sister, amanda.
my paper is coming along quite nicely im happy to say. after an unpleasant bout of data analysis, my galaxies have finally started to reveal interesting insights into their formation history. that sounds pretty cheesy, but i'm happy to be doing physics again instead of fighting with plots and understanding every nuance of calculations based on years of assumptions, using data sets burdened by inherent observational biases.

anyway... now all my thoughts shared here will be titled, annotated and potentially referred to in the future. that's somehow reassuring.
No comments: