after the major earthquakes that hit hawaii sunday morning, it appears that most of the telescopes on mauna kea are all in pretty good shape. one of the keck telescopes has some pointing and guiding issues, but the technicians predict it to be up and running in a week or so. the most damage seems to have been at the canada-france-hawaii telescope (CFHT). the offices were shuffled and a full assessment of damage to the telescope and dome is not complete yet. check out their website to see some pictures and to keep updated!

if youre interested, here are some pictures from my observing run on mauna kea 3 years ago!

in the first picture, Keck I is on the left, Keck II is in the center and the NASA Infrared Telescope Facility (IRTF) is on the right. CFHT is further off to the right.


in the second, CFHT is the third from the right (actually, its the 4th from the right, but two of the telescopes have morphed into one in this photo!) and the kecks are the two little bubble domes near the middle.

just look at this picture!!!!! i think it's absolutely gorgeous. stepping back for a moment to think that this single photo is a mosaic of 165 individual images taken from the cassini space craft as it solely flew around saturn and then sent the files back to scientists on earth..... wow. its cool what we can do with little robots in space!

the sun was directly behind saturn when cassini took these shots, lighting up the rings from behind. notice all the subtle details in the structure that you can see, color differences... some red areas, some blue.... faint outer rings that are really hard to detect. amazing.

here's a link with the full-size pictures!
No comments:

life in the universe?

(sorry i couldnt display it here directly, but i was having problems....

as of today (oct 9, 2006), there are 210 confirmed exoplanetary candidates.
go to http://exoplanet.eu/ for the most up-to-date page on exoplanetary discovery!

the kepler mission is currently planned for launch in october 2008. this date gets pushed back every so often due to technical difficulties, but mostly funding issues as far as i can tell. many projects under NASA's budget have been fiscally stressed over the last several years do to, in my opinion, the ridiculous amount of activity demanded by the government... namely, manned missions to the moon and mars. these missions cost a lot of money and yet NASA is still expected to keep up all of its old missions while also trying to plan these too with a pretty minimal increase in their annual budget....

ok, enough of my rant, enjoy the video!!!

tonight's full moon is dubbed the "harvest moon" and is the full moon that occurs nearest to the autumnal equinox. 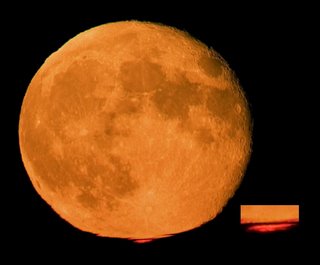 image above from astronomy picture of the day

this moon signifies the beginning of the harvest season for many cultures in the northern hemishpere.

you may have noticed at some point that when the moon is close to the horizon, just after sunset, it appears larger than it usually looks when it's high in the sky. a common misconception is that this is mostly because we view the moon near familiar objects like trees or houses, etc... this is not the case as explained by Donald E. Simanek, here.

i also remember thinking when i was a kid that the harvest moon was my favorite because it appeared to have an orange tint. it turns out that this is true for the same reason that the sky is blue! you can follow that link for a full description (or this one by the bad astronomer. briefly, it is because the light reflected off the moon travels thru more of the earth's atmosphere to reach us when the moon is on the horizon. the particles in the atmosphere scatter the photons of light as they travel, preferentially scattering the higher frequency photons (blue, green and yellow), leaving the photons with frequencies corresponding to orange and red to meet our eyes. this effect become more apparent when there is more pollution or other particles in the atmosphere, so the degree of orange-ness differs depending on where on earth you are!


here is some other intersting stuff about the full moon.
No comments: