i admit that i don't remember hearing the name victor jara before arriving in chile. i read lightly about his influence in the chilean "cultural renaissance" in my travel guide book. my interest sparked when i saw that one of his most popular songs is called Te Recuerdo Amanda (see performance here).

i bought a compilation album of his as i waited out a long layover in santiago. the woman who completed the transaction was very excited to see that i was buying it, so i also became very excited to hear it.

his songs are relaxing and mellow, yet moving and intense, even though i don't understand most of the words. he reminds me of a chilean combination of leonard cohen and bob dylan. simple acoustic guitar behind deep folk melodies that sing of the political struggles of working people. this past saturday night i was charmingly serenaded with this song that bears my name... a beautiful rendition that nearly brought me to tears.

Te Recuerdo Amanda tells a tragic story of two factory workers who meet outside during their breaks. innocent manuel joins the workers struggle and is killed, one of the many who never return to work after the break-ending sirens sound. it's a beautiful song and represents a good example of the political activism victor jara expressed through anecdotal tales of workers. 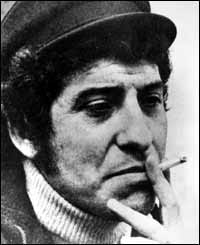 Jara's music helped found chile's nueva cancion (new song) movement which accompanied a revolution among the working class. they fought against the repression by the ruling upper class and eventually won with the victory of new president, salvador allende, in 1970.

Jara, along with singer violeta parra, continued to push for more rights for the people... placing himself as a target of the chilean right wing. On September 11, 1973, the chilean military staged a coup d'etat that resulted in the murder of allende, the appointment of (CIA-backed) augusto pinochet as dictator, and the arrest of victor jara. for four days, victor jara was held in the chilean stadium, beaten and tortured in front of other prisoners... and finally murdered, at the age of 38. he wrote a final poem, with broken fingers and wrists, smuggled out of the stadium in a fellow prisoner's shoe... "silence and screams are the end of my song."

he never stopped representing hope for the people, even though he suspected his death would result from the coup that september day in 1973.

it makes me think of my home and wonder who harbors such passion today in the struggle against the american neo-conservative right wing. why has it taken 6 years for the majority of the US public to really dislike the bush administration? how has pop-culture become so ridiculously indifferent to the growing social divide? when will we all recognize that the need to take responsibility for our actions by treating other people sympathetically should come before our overwhelmingly selfish pursuit of happiness through consumerism and consumption?

According to a UN study,


Today’s consumption is undermining the environmental resource base. It is exacerbating inequalities. And the dynamics of the consumption-poverty-inequality-environment nexus are accelerating. If the trends continue without change — not redistributing from high-income to low-income consumers, not shifting from polluting to cleaner goods and production technologies, not promoting goods that empower poor producers, not shifting priority from consumption for conspicuous display to meeting basic needs — today’s problems of consumption and human development will worsen.

… The real issue is not consumption itself but its patterns and effects.

… Inequalities in consumption are stark. Globally, the 20% of the world’s people in the highest-income countries account for 86% of total private consumption expenditures — the poorest 20% a minuscule 1.3%.

so much that we easily take for granted.... i'm happy i've discovered victor jara.

Dear Amanda,
I don't know you but as I was searching the web for info on "Te recuerdo Amanda" and Victor Jara, I found your page and am grateful for your accurate summary.
Thank you, I love the song too and will certainly be even more moved when I will hear it again now that "I know".
Gabrielle