i admit, i like this observing gig! tonight is the last night of my 5-night official training run on the gemini-south telescope. i'm in charge tonight which is a bit daunting... so many things to remember on this complicated beast. luckily, it's partially cloudy. in general, moderately bad weather is the WORST type for observing because you constantly have to check for clouds and re-acquire guide stars and pause observations that are crappy, etc.... but for tonight it relieves the pressure a bit because i dont have to be as efficient as i would normally want. you have to be efficient when people tell you things like "this telescope costs $X to operate per second, so make every second count!" yikes! 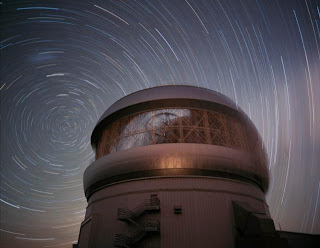 overall, this observing run has been quite nice. despite the complication and stress of taking other people's data and trying to not break anything, it's really fun to run gigantic telescopes. since we're doing several different projects throughout the night, we look at things in our galactic neighborhood right before focusing on a galaxy as it was when the universe was only a couple billion years old!

and the night sky.... nothing soothes my soul like mountain vistas and hundreds of visible stars in the sky. the southern night sky has certainly lived up to all my expectations. the new moon denied us any of the sun's nighttime reflection just a few nights ago and it remains too dark outside to see my hand in front of my face. at first i can only see constellations that have quickly become familiar: the southern cross, upside-down orion, and of course the bright "evening star" venus... i cant recognize too many more southern constellations yet without the aid of a sky chart. 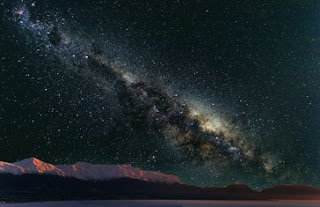 after a few minutes my eyes adjust to the darkness and more and more stars pop out of the blackness. i begin to see the elongated fuzzy patches that cross over the whole sky in a long straight line. i cant quite focus on all the elusive white speckles when i look directly at them, but what i see just off the center of my vision reinforces why our ancestors named it the great milky way. in german, they call it "milchstrasse" which translates to "milk street". what is the name of the milky way in spanish? "calle de leche"? anyone?

i love just going outside throughout the night and letting my eyes become acquainted with the immensity of space over and over again.

another fun aspect of the observing in chile is the food at the lodge! there are chilean chefs who cook meals for us each day. i work for about 14 hours a night this time of year and try to sleep for 7-8... so it's nice that they cook food i can eat! the food this week has been very good, but almost everyday there has been some food item offered that i couldnt identify. this isnt necessarily a bad thing, in fact it's kind of exciting! i've tried everything i've encountered so far (even the intestine that showed up on a grilled plate in La Serena last week. i had one tiny bite and i'll suffice it to say that i did not have another). one meat looked like a cornish game hen that had all the bones sucked out of it so it looked deflated then fried. it turned out to be chicken. there was one thing that i didnt ask about because the consistency was quite like tongue, and i thought it would be better not to know. there's always chilean salad which consists of tomatoes and onions in a bit of oil. i've also had some great desserts that contain lots of various fruits and syrups!

sometimes while observing i have a hard time sleeping a full 7 or 8 hours... due to the altitude, maybe? this run i've had no trouble at all sleeping, which must be due to some combination of the elevated stress level of such complicated observing all night long... and the fact that i've been eating soooooo much yummy food!! UPDATE: this image, captured by miloslav druckmuller in argentina with the patagonias in the foreground, represents almost exactly what i saw when i first arrived in chile in january.

you can see the wonderful comet mcnaught in addition to the long stretch of the milky way. above the comet and a bit to the right you can see a little fuzzy smudge, and then another slightly larger smudge further up to the right. these are little irregular galaxies called the small and large magellanic clouds... only visible from the southern hemisphere!

the large magellanic cloud harbored the closest supernova in 400 years... supernova 1987a! all of us dorks celebrated the 20th anniversary of this spectacular stellar explosion on february 23rd. i tried to take more observations of the supernova last week, but the clouds prevented my success :(

"milchstrasse" jumm... well in spanish is 'via lactea' quite different huh?

Wow! Nice blog.... I came across this while searching for mcnaught pictures.

Boy, (or girl) you have high standards! Can you live up to them? ;)