today marks the 10th anniversary of the death of carl sagan. Since he has been a hero of mine for such a long time, i wanted to contribute something to his memory before catching a plane this afternoon.

my first memory of carl sagan is from my freshman year in college. i was majoring in french and taking the university's only undergrad astronomy class as my science requirement. the eccentric professor played a few episodes of the COSMOS mini-series, produced in the 80's by carl sagan and ann druyan. i really enjoyed them and wondered why i had never seen anything so easily understandable and inspiring before. a couple months later, the movie contact was released... proving to be a huge inspiration in my thoughts about the future. i only found out many years later that the movie was actually based on a novel by carl sagan and ann druyan!

later that spring, i decided to change my college major into some sort of science because my curiosities about the world and the universe felt unsatisfied without the observation, investigation and critical thought demanded by science. now armed with hindsight recognition, i thank carl for inspiring the direction of my pursuit.

not only were carl's scientific discoveries about our solar system and contributions to the early space program substantial, he also applied his critical thinking skills and scientific perspective to socially relevant issues. he successfully applied science to public welfare. he managed to communicate his ideas publicly in a kind, uplifting and un-condescending way... which is a diffcult task and rarely achieved by leading experts, in my opinion. i admire this quality in carl.

many years later now... i'm almost finished with my astrophysics PhD and again deciding what i want to do with the rest of my life. i find myself thinking a lot about carl's life as an astronomer and how he became such a strong public influence by passionately speaking about the things he'd learned from pondering the universe. he had such an amazing way of providing perspective for people who dont think about the universe in terms of "billions and billions" on a regular basis. He sparked the imaginations of people all over the world to contemplate the natural wonders of our universe... showing clearly how we need not invoke supernatural phenomenon to explain or feel the awe, joy, wonder, amazement... humbleness that strikes whenever we look at any one of the beautiful images provided by the hubble space telescope or others....

i hope to share with those around me and those i meet, some of the inspiration i've discovered from pondering the universe... (as a career.. haha!!) people often exclaim when i meet them "i've never met a real astronomer before!" then they usually ask me a question or two about something they've "always wondered" (and many times i even get the "you know, you really remind me of jody foster in contact. do you search for aliens, too?"). i love these conversations because i can have them with people from every country! every human considers these questions and uniquely discovers knowledge and perspective necessary for appreciating our extraordinary and finite existences. everyone seeks to explore inward and outward from the "pale blue dot" that is our shared home... the earth.

i also wanted to share with you the beautiful essay written today by carl's collaborator and life partner of 20 years, ann dryuan, ten times around the sun without carl.
3 comments:

home for the holidays 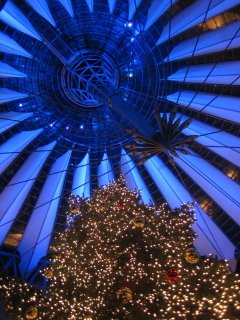 i'm back in the US. after an exhausting and complicated series of flights, i'm in austin. i returned just in time to unpack, repack and fly to ohio tomorrow. whew!

life is a whirlwind right now... it seems surreal. returning to the instantly familiar US feels bittersweet. i'm only here for a few weeks... long enough to see my family, my advisors, my friends, my boyfriend, my new mamma friends and meet their little babies ... and then i'm off to south america. culture shock? it's seems that i dont have time.

i'll miss deutschland... the friends who now feel like my oldest and dearest... the beer... the museums... the language... the U-bahn... the efficiency... the espresso... the relaxed pace of life... the soccer... the winter... it's an amazing experience to live in a different culture long enough to watch how the people change with the seasons. i have to figure out the traditions thru observation and then asking about what i cant understand. like at the beginning of december all the sudden in every store appeared these wreaths... like you would set as a centerpiece for a table.. and they have four fat candles evenly spaced, sticking up.... 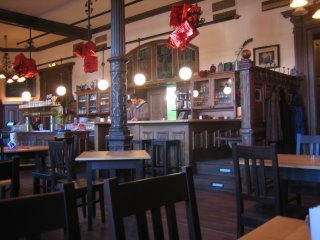 the four days of advent.... you light one candle on the first sunday of december... then two candles on the second sunday... etc... so these wreaths flood all the stores for about week and then they linger for the lazy. a very quaint tradition!

the craziest part is that despite all the differences, germany harbors a western and very modern culture. it's intuitive for me eventhough new challenges popped up for me everyday! i wonder how much intuition i'll discover in the southern hemisphere... where i've never been! my curiosity peaks with anticipation!

... but right here and now, in the present moment... i will enjoy the company of those dear to me who i've missed over the last several months. i feel luckily to receive such support from my friends and family. thank you. i look forward to laughing and talking and sharing! 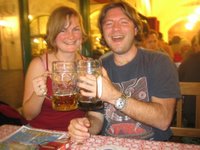 there was a comprehensive conference in california recently called "beyond belief" which brought together people to discuss... science and religion... and how they fit together, or not. if you do a quick youtube search, you'll find many video clips of various presenters.

my personal opinion is that spirituality is a good thing, and unique for each individual, but *religion* is not always a good thing in that most ask their followers to abide by certain rules and belief systems, teaching that all other religions are bad and wrong. this black and white picture has caused many many a war to be fought and lives to be lost. this is only one problem i have with "religion" but i will not write any further about my opinions now, and instead give an excerpt from an article i enjoyed about the conference!

"Maybe the pivotal moment came when Steven Weinberg, a Nobel laureate in physics, warned that ..the world needs to wake up from its long nightmare of religious belief,.. or when a Nobelist in chemistry, Sir Harold Kroto, called for the John Templeton Foundation to give its next $1.5 million prize for ..progress in spiritual discoveries.. to an atheist .. Richard Dawkins, the Oxford evolutionary biologist whose book ..The God Delusion.. is a national best-seller.

Or perhaps the turning point occurred at a more solemn moment, when Neil deGrasse Tyson, director of the Hayden Planetarium in New York City and an adviser to the Bush administration on space exploration, hushed the audience with heartbreaking photographs of newborns misshapen by birth defects .. testimony, he suggested, that blind nature, not an intelligent overseer, is in control.

Somewhere along the way, a forum this month at the Salk Institute for Biological Studies in La Jolla, Calif., which might have been one more polite dialogue between science and religion, began to resemble the founding convention for a political party built on a single plank: in a world dangerously charged with ideology, science needs to take on an evangelical role, vying with religion as teller of the greatest story ever told.

Carolyn Porco, a senior research scientist at the Space Science Institute in Boulder, Colo., called, half in jest, for the establishment of an alternative church, with Dr. Tyson, whose powerful celebration of scientific discovery had the force and cadence of a good sermon, as its first minister.

She was not entirely kidding. ..We should let the success of the religious formula guide us,.. Dr. Porco said. ..Let..s teach our children from a very young age about the story of the universe and its incredible richness and beauty. It is already so much more glorious and awesome .. and even comforting .. than anything offered by any scripture or God concept I know...

She displayed a picture taken by the Cassini spacecraft of Saturn and its glowing rings eclipsing the Sun, revealing in the shadow a barely noticeable speck called Earth."

read more ... a free-for-all on science and religion
2 comments:

out of iraq and out of office

at least there's one good politician in ohio, dennis kucinich. i've been a fan of his for several years now. he thinks the only way to get the US out of iraq.... is to cut off funding for the administration's actions!! makes sense. the best way i've found to kill old habits is to run out of money to support them! he describes his plan here on the huffington post.

i also think that dubya and dicky are not fit to run this country, and worse, have indeed committed crimes worthy of impeachment. BUT, we cannot impeach bush alone, it has to be both. here are 14 possible articles of impeachment! (yes, thats right... 14!!!!)
No comments:

i love the phd comics comic strip. the artist and former grad student has been touring around the US recently giving lectures and connecting with his grad student fans. he came to austin last summer and i'm quite amused by the anecdotes he took away!! haha!!

grad school is not all work and torture... just mostly! :)
No comments: