the moon continues to fill up with light over the next few nights as it passes by the constellation, leo. look to the east in the early evening to watch the moon slowly approach saturn. tonight, 8 march, 2009, saturn is at opposition - it sits opposite the sun in our sky, so it's up all night! if you have access to a small telescope (local astronomy clubs, friends, etc...) or binoculars, take a look! saturn's rings are edge-on right now from our perspective on earth, but its a nice treat to see saturn and the moon only 8 degrees apart in the sky... as they will be tuesday night, 10 march, 2009, when the moon is full!!

it makes sense that the full moon appears near saturn in our sky when saturn is at opposition. the moon shines because it reflects sunlight. when the moon is full, sun shine covers the entire surface of the moon that is visible to us. this happens when the earth sits between the sun and the moon so that the sun shining from behind us illuminates the moon.

tuesday night, both saturn and the moon sit exactly opposite of the sun in earths sky! 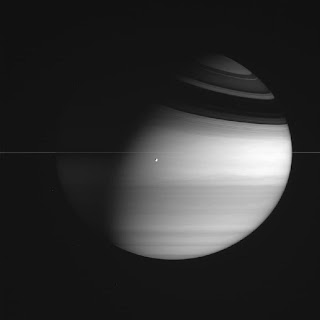 this image of saturn was taken by the cassini space craft.

Thanks for the tip!!!

Hi Amanda, 1st time to your site-great look! I know next to nothing about Astromomy, but I am curious. Will Saturn be in the same location tonight for me in Northern Calif.US.as it is for you in UK? Very interested, because I would love to follow your site to see where the planet are, provided they are in my same location. Tiffiny Tennyson
http://tiffinyandfriends.blogspot./ or tiffinyt@suddenlink.net
ENJOY YOUR TRIP!!!

Will it be tons different in the States? Or just sort of different?

Hi I just want to say I really like your blog!
And the photo of Saturn is really cool.

the views of the night sky are very similar from most of the northern hemisphere: europe, north america, chine, japan, etc...

from the southern hemisphere, you can see some similar constellations, although they are upside-down, including the alignments of the moon and planets! way in the south you can also see completely different stars and constellations than you can see from the north!! readers from the australia and other places in the southern hemisphere sometimes share pictures so we can see the differences - maybe someone from the north and someone from the south can take images of saturn and the moon conjunction tomorrow night so we can compare!?!

Interestingly, I had recently blogged this piece:

And just now I ran across this blog, so I included it in my links.

Somehow the painting by david ho:

reminds me of my earth folk searching for a new star.

thanks! because of your post - i was inspired to find a local astronomy club. me, my kids & husband - & hopefully a few friends are going to participate friday!!! thanks, again for looking out/UP!!!
http://www.blondie-lox.blogspot.com

blondielox - your news completely made my day! enjoy your adventure and i'll hope for clear skies for you!