venus is now approaching the the sun in our sky. venus is currently on the same side of the sun as the earth, so it is close to the earth right now. the point when venus is exactly between the earth and the sun is called inferior conjunction, and occurs on 29 march, 2009. 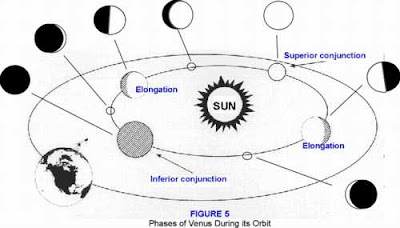 after venus passes thru inferior conjunction, it will move to being the earth's "morning star" although for the next few days, you can spot venus in the early evening and in the early morning!

because of the relative positions of venus, the earth, and the sun, it goes thru phases, similar to the phases of the moon. the new moon occurs when the moon is directly between the earth and the sun, so you can understand why venus actually looks like a little sliver right now, even though it seems so bright in our sky! we will see a "new" venus at inferior conjunction.

here are photos as venus has approached inferior conjunction over the last several days! 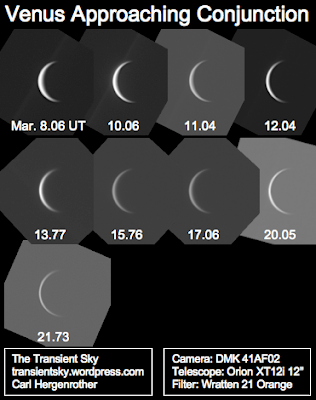 Doesn't that depend on which hemisphere you're in and how far from the equator you are?

Because there is isn't a transit this year Venus must be passing either north or south of the Sun (north this time, I gather from other reports). To see it in both the evening and the morning you need your local horizon to cut the line between Venus and the Sun in opposite directions at each time.

I suppose if we were just before the equinox rather than just after then somebody at the north pole could observe Venus continuously (it would effectively be circumpolar for them).

good points, ed! you definitely have better viewing of this event the farther north you live. in principle, you can see the event from deep in the southern hemisphere, but venus sets just before the sun a rises a bit afterwards, so you risk the danger of looking too closely to the sun to see venus. dont look at, or near, the sun!!