sunday's successful launch of discovery sent the shuttle sailing towards the international space station (ISS). discovery had to get into orbit with the ISS and catch up to it in order to dock. during the approach, the two flew together thru the night sky very quickly and very closely! just before the docking on tuesday, marco langbroek captured this image as the two objects passed over the netherlands: 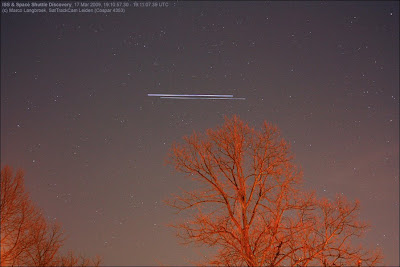 the brighter streak on top is the ISS and the fainter one below is discovery. they move quickly across the sky as you can see in this few second exposure.

once the discovery crew assembles the final solar panel on the space station, the ISS will become the second brightest object in the night sky, surpassing venus for the honor! my favorite time to spot the ISS is if it happens to be passing overhead at sunset or sunrise, because it is super bright!

you can figure out when the ISS (or many other orbiting satellits) will pass over your part of the earth at heavens above, or using google earth as described by orbiting frog.

I didn't realize I could see the ISS in the sky. That's super-cool. I'll have to find out when I can see it.

We were in Marfa, Texas, where the famed "Marfa Lights" are said to be seen. At a roadside stop specifically setup for tourist to look for these lights, we watched satellites pass overhead. Upon pointing them out, the ufo hunting was forgotten. I really like the photo.

Incredible photograph! I saw the international space station fly directly overhead my city about 2 years ago. It was a nice clear night, so we had an excellent view, and we were shocked at how fast it was moving!

i've been to marfa a few times... stopped by during my many many observing trips to mcdonald observatory in west texas. never saw the marfa lights, but heard several eye-witness stories that described completely incredible, and seemingly unrelated phenomena!?

Love your amazing blog. Thanks for the picture of the ISS and Discovery flying side by side. I'm sending that one to everybody I know! Thanks for bringing us this truly remarkable information.
You are an orbiting angel!