if you look up in the sky tonight as the sun sets, you'll be sure to notice the crescent moon floating next to the amazingly bright planet venus in the western sky (assuming there are no clouds blocking the view!). 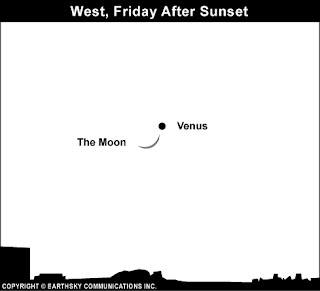 while the moon has passed by venus in our evening sky during the last several months, this will be our last opportunity to see the evening alignment for a while. next month, venus will pass between the earth and the sun so that it will rise in the morning sky for the rest of the year! venus will not be our "evening star" again until 2010!

according to solar system live, here is the alignment of the planets around the sun tonight: 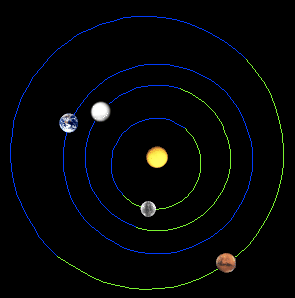 if you imagine the earth spinning counterclockwise, you see that venus is in the sky as the sun is setting.

here is the alignment of the planets on 30 march, 2009, showing venus passing between the earth and sun. 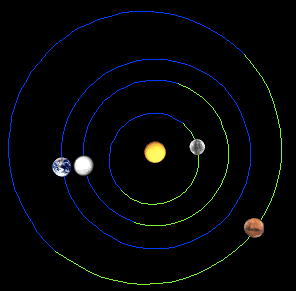 in this case, venus rises in earth's sky just before the sun and is therefore visible in the morning! you can also see from these images, how much more quickly the closest planet, mercury, moves around the sun than the 4th planet, mars.

so... look up tonight, take some pictures, and enjoy venus next to the moon! 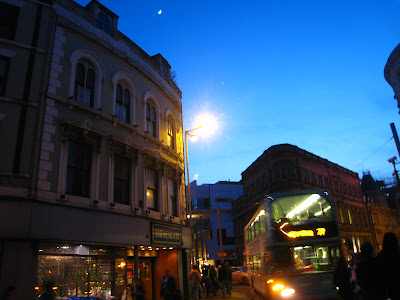 I read your blog every day. I'm just a randon astronomy-phile that ended up being a geology professor. So I enjoy your blog for some vicarious astronomy. Keep up the good work!

thanks! my guess is the banner will change with the seasons, but i decided to spice up the top o the blog a little!

A great article indeed and a very detailed, realistic and superb analysis of the current and past scenarios.