comet lulin passed around the sun last month and now approaches the earth, on its way back to the outer solar system. despite what my fingers keep typing, lulin was not named after a harry potter character, the comet was named after the lu-lin observatory in taiwan, where it was discovered in july 2007. lulin will reach its closest point to earth on february 24, 2009, passing at a distance of 0.41 AU (one astronomical unit (AU) is the distance between the earth and the sun). february 24th is an exciting date from our position in solar system because we'll also be able to see a quadruple transit of saturn!!

i've collected some images taken around the world, but check out space weather and caffeinated astronomy for other nice collections!
jack newton took this image in arizona on 18 february 2009.

the green glow of the comet comes from the gases around the nucleus. cyanogen and diatomic carbon both glow green when illuminated by the sun's light. the tails of comet lupin change over time, innocently changing positions and brightness as they interact with the sun's energy output!

here's a diagram of lulin's path around the sun, showing rough positions of the planets as well.

comet lulin will reach a brightness of 5th magnitude, which means some people might be able to see it with their eyes. you can definitely see it with a steady pair of binoculars, or even better, with a small telescope.

here's a nice image by schur's astronomy, created by a long exposure while moving the telescope along the sky, following the motion of the comet! 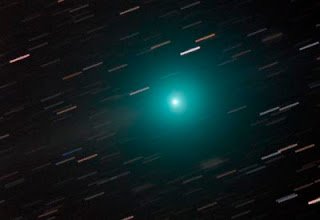 Hey Amanda, you should put up our Swift images!!

FANTASTIC...great page..will keep it and study the different interesting things that are posted..THANK YOU, Linda Dillon

Starry Starry night...anybody out there?

Being trying to spot this for about a week now but the clouds are ruining it!!!!! I hope I get to see it before it passes by..