there are many organizations out there that offer people the option to "buy" a star. in my experience, these are mostly silly because the profit goes to the individual seller and nothing changes regarding the star's working name.

the good news is that i recently found out about an organization that allows one to "adopt" a star and gives all the money to support scientific research! welcome the pale blue dot project, which is hosted by a non-profit organization - the white dwarf research corporation (WDRC)!

as i was investigating the validity of this project, i discovered that i know most of the members of the board of directors of the WDRC!! of the 6 BoD members, i've met ed, observed with anjum, danced the samba with kepler, played bluegrass music and sand volleyball with mike, and enjoyed a few beers in austin with travis! that's travis on the right, and nairn on the left, who informed me of the pale blue dot project. 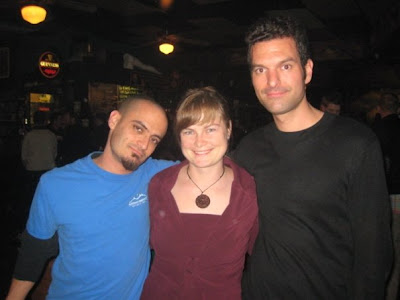 so what is it you ask?

the members of the WDRC will help detect planets revolving around distant suns from the data of NASA's kelper space telescope, scheduled to launch next month! since the WDRC is a non-profit group and not funded by NASA, support for their analysis of Kepler's data will come from donations the public makes to the pale blue dot project to adopt a star! you can search thru a catalog in google sky and adopt any star available! as a result, you will "receive a personalized certificate by email and will be acknowledged in both the text version of the catalog, and in the placemark for their adopted star in Google Sky." cool! 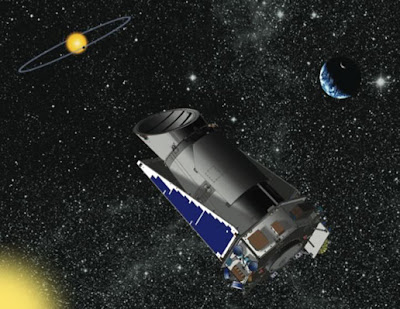 each star that you can choose to adopt has a designated string of numbers like "022009" to identify it. amusingly, travis noticed that the catalog number of a particular star - 47 53787 - spells "Is Jesus" on a telephone!! therefore, he is offering the opportunity for one lucky bidder to officially adopt the "jesus" star on ebay!! the bidding ends 26 february, 2009! :)

as of today, humans have detected evidence for 340 planets outside of our solar system! none of these planets are earth-like as no current systems have the sensitivity to detect earth-like planets around other stars! astronomers predict that with kepler, we should be able to find hundreds of planets the size of earth or bigger at various distances from their suns!

to hear more about the process of how the white dwarf research corporation will search thru kepler's data for new exosolar planets, here's travis (metcalfe) speaking for a google tech talk on january 13, 2009.


info on the video:

ABSTRACT: In February 2009 NASA will launch the Kepler satellite, a mission designed to discover habitable Earth-like planets around distant Sun-like stars. The method that Kepler will use to detect distant worlds will only reveal the size of the planet relative to the size of the host star, so part of the mission is devoted to characterizing distant Suns using a technique known as "asteroseismology". I have developed an automated approach to matching computer models of stars to such observations, based primarily on a parallel genetic algorithm. I will give a broad overview of how we can probe the insides of stars using seismology, and I will provide a general background on the operation of our model-fitting application. I will conclude with our first results on a nearby star: the Sun.

Speaker: Travis Metcalfe
Travis Metcalfe is an astronomer at the National Center for Atmospheric Research in Boulder, Colorado. He started his career in the backyard of his childhood home in rural Oregon, and continued it in such places as Tucson, Austin, and Boston before landing in Boulder four years ago.

Does the guy on the left work on the LCOGT at Santa Barbara? I'm sure I've met him somewhere.

hi stuart! yes he does, thats nairn baliber. small world this is. i'll ask him if he remembers meeting you somewhere!

Wow, those white dwarf guys are special... Though we have thrown around the idea of selling Lyman alpha emitters to pay for HETDEX.

By the way, I object to their ebay posting, it says the item is new!