I remember the exact moment when the very first results were released from the wilkinson microwave anisotropy probe... WMAP... "double-U map."

it was my first year in grad school, february 2003, 8 months after i moved to austin, texas. many UT astronomers sat together in the main classroom watching an internet-fed NASA press-release projected on the front screen. with anticipation in the air and excitement lowly buzzing around the room, we informally drank from our coffee mugs and smiled at the faces on the screen and at each other!

these results were to revolutionize applied astronomy!

in my very first astronomy course ever, as a first-year undergraduate student (studying french), i learned that the value of the hubble constant was somewhere between 50 and 100 km/s/Mpc (astronomers refer to the hubble constant as H_o ["H-naught"]). this seemed like a pretty big spread in possible values for H_o, which especially didnt help my understanding a number with the units of velocity per unit distance... kilometers per second per megaparsec... km/s/Mpc...?? distance divided by time divided by distance. but the distances cancel out, right? so it's just a per second... (1/sec)... thats a rate! the hubble constant describes the rate at which the entire universe is expanding and we know that it lies somewhere between 50 and 100 km/s/Mpc? cool!

that was my thought process as an undergraduate anyway. jump forward to 2003 when the NASA spokesperson on the screen in the front of the classroom announced that the first results for the WMAP were tallied, and revealed that Hubble's Constant is 72 km/s/Mpc and the universe was 13.7 +/- 0.2 billion years old! how precise!?! goose bumps found my arms that day, when they told us this number and showed us the first image of the cosmic microwave background radiation (shown below). the updated 5-year results (revealed by NASA last week) show that hubble's constant is 70.1+/-1.3 km/s/Mpc and the universe is 13.73 +/- 0.12 billion years old! period.

how does the WMAP experiment reveal this information? by looking at the dying glow of the first light possible for us to "see" after the big bang. the colors show very tiny temperature differences.

here's the "map" of the universe revealed by the 2003 first-year results...

here's the equivalent map after collecting 5-years worth of data. 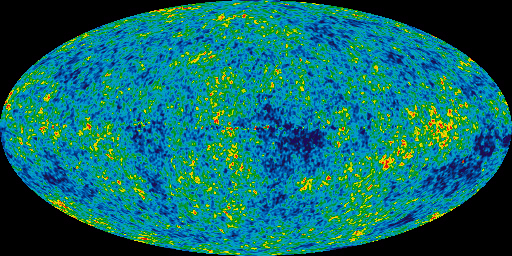 they look very similar. you can see the same general patterns in each... the dark blue spot near the center on both images, and there's another one towards the lower left (cosmic voids?). the new data more precisely isolates the orange "hot" spots from the blue "cold" spots in both space and difference in value.

to understand the oval shape of the WMAP image, i swiped this description and image from ned wright's cosmology tutorial...

"These ovals are all maps of the entire celestial sphere in an equal-area Mollweide projection. The image at right shows a topographical map of the Earth in this projection. Note that there is no part of the Earth that is not included in the oval, and thus there is nothing "outside" the WMAP map." 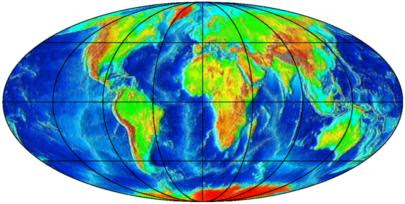 to read more in-depth introductions to cosmology, see ned wright's cosmology tutorial, or WMAP for dummies. phil plait, at badastronomy.com, gives a more brief, and to the point description of the dying glow of the big bang that WMAP actually sees. sean carroll at cosmic variance reflected on the third year WMAP results and introduces more of the physics-lingo involved in the discussion.

i wonder what will be the next big astronomy moment that will leave momentary details etched in my mind forever?

Just so you see how old I am, when I started studying astronomy, there was no dark energy!. The supernovae result was not out yet. The universe was 70% dark matter and 30% visible matter when I took introductory astronomy. The Hubble constant was still in the ranges you mention and the age of the universe was considerable longer... our notion of the universe has changed sooo much in the last decade!

According to Louisa, we have:
baryonic matter 4.6%, dark matter 23.3%, dark energy (antigravitation)
72.1 %.
http://riofriospacetime.blogspot.com/
Interesting results, but how can this
(backround microwave radiation) prove tje Big Bang, which is the theory of
main stream cosmologs? Are the theories of Arthur Eddington and Fred Hoyle wrong?