i hope some of you got to the see spectacular and rare triple flyby tonight! the european space craft, jules verne, came into view first, rising in the southwest and brightly passing almost overhead. (jules verne was a popular author of the 19th century, who pioneered the science-fiction genre with popular novels like journey to the center of the earth and twenty thousand leagues under the sea).

it was difficult to spot jules verne at first because there were scattered clouds overhead which confused us into thinking all the stars were moving! jules verne was bright at about 1st magnitude, but it was nothing compared to the international space station (ISS), which followed about 5 minutes later. the ISS was negative two magnitudes.... which means super-bright! way brighter than anything else in the night sky other than the moon! the shuttle, endeavor, caught our eyes, as it followed the same path across the sky as the ISS, just 40 degrees or so behind it, not as bright, but still bright indeed! it was so cool to see both of them trailing across the sky in tandem!

i excitedly looked thru binoculars to try to find more details of the bright ISS. I could see the brightest central region reflecting the sun's light, then some extended metallic stuff sticking out to the sides... solar panels! 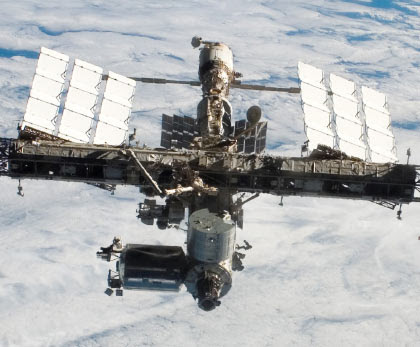 the ISS has been in orbit around earth since 1998. it constantly moves around the earth at 350-460 km (217-286 miles) above the surface, and moves at 27,700 km/hour! that means it makes nearly 16 orbits everyday!! so why is it so rare that we see the super-bright ISS pass overhead? since the ISS doesnt produce light of its own, we rely on reflected sunlight to see it. the ISS is only illuminated when it passes is in sunlight... which means most of the time that it passes overhead, its daytime which prevents us from seeing it, or it's nighttime, which prevents it from being illuminated. we can see the ISS over our heads when it passes near sunrise or sunset. at sunset, we are just barely in the darkness of earth's shadow, but the ISS, still floating above the surface, still receives and reflects the sun's light! the ISS is soooooo bright because its football-field size reflects a lot of light!

what a fun sight tonight!! thanks to my students who came to the roof with me after our lab class to watch the event :)