the alignment of the objects in our night sky will provide some very nice early evening viewing for the rest of this month!

SATURDAY, JUNE 16: tomorrow night the waxing sliver moon hangs in the W-NW sky early in the evening. it sits below pollux, one of the two main stars of gemini, with the other, castor, to pollux's right. above the moon to the left is the dashingly bright planet venus. let your eyes follow farther up and to the left of venus and you'll spy a bright planet saturn and then the star regulus.

MONDAY, JUNE 18: saturday's noticeable alignment is a mere prelude to monday night's spectacular view! look to the west to see the bright venus, the crescent moon, saturn and regulus in a straight line from bottom to top! 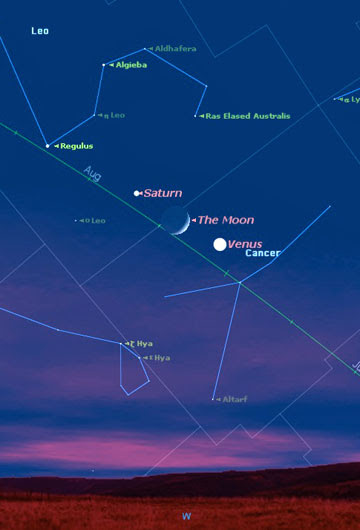 *note* this picture depicts the view from the northern hemisphere. from the south, the alignment will go from bottom left to top right!!

TUESDAY, JUNE 19: the very next evening, venus and saturn will still be bright and a little closer together, but you'll notice the disappearance of the star regulus as the growing moon occults it by passing right in front of it!

WEDNESDAY, JUNE 20: the line-up evolves. from lower right to upper left: venus, saturn, regulus, la luna. also, in the S-SE, you can see jupiter near the star antares. saturn and venus will not be visible in our sky anymore by august, but jupiter will remain over the next several months! any telescope will easily reveal 4 of jupiter's moons: io, europa, ganymede and callisto.

THURSDAY, JUNE 21: summer officially begins in the northern hemisphere on june 21, the summer solstice, as the north pole points toward the sun. all you in the north can enjoy the longest day of the year (while i try to defrost from the snow storm occuring on this mountain top!)!

SATURDAY, JUNE 30: the biggest show occurs at the very end of june. not only is june 30th the full moon (a blue moon for some), but venus and saturn will appear 0.7 degrees apart in the western sky! for reference, the angular diameter of the full moon on the sky is half a degree. the two planets will be very bright and very close to each other, but they will set soon after sunset so make sure you go outside to enjoy a romantic sunset and planetary spectacle!

keep looking up and enjoy!

Praying for your health and hoping you appreciate the gift God has given you to be able to work at such a wonderful job. I personally harbor archaic feelings about such confluences, far removed from my Christian roots, and I wonder if, on a cold night while the camera pans any of you ever stop to consider who put the stars there in the first place, and what the true meaning behind all these things is.

Greetings from warm USA. God Bless You, and enjoy your peaceful observations.

thank you for your thoughts, anonymous. i assure you that i have spent, and continue to spend a lot of time while i'm up all night considering the meaning behind all that i see through the telescope. i marvel over the fact that i *can* think about it at all, or understand the physics of thermodynamic equilibrium that govern the burning stars, or maneuver such a complicated piece of machinery to collect photons of light that have been traveling through space for billions of years! i appreciate the fact that i've continued studying for years and years and years, creating the opportunity to work at the wonderful job that i have. i cannot speak for all those who look through telescopes for science and/or enjoyment, and i cannot speak for all those who look to the skies at night and feel a humble sense of amazement, but i can tell you that i have found much more inspiration and satisfaction from asking the questions of "how" and "why" these things exist and evolve than i have from asking "who" created them.

one day i'll get around to writing a lot more about that topic, but i'll leave it at that for now. please feel free to ask me more questions that might insire me to write more sooner! thanks for your comment!

On Father's Day night the cresent moon, venus, saturn and Regulus were all in a perfect line with the moon appearing to have each and ever furter focal points of the cresent. Early as it was they were the only thing visable at the time in the NW Washington DC/Maryland sky for a while. Would have made a great picture.

Yo, hello there Astropixie! Glad to see you are still watching over us through the big scopes. Unfortunately there is so much light polution here in Austin now, it is difficult to see much of anything.

Things are still the same in the states...we recently traveled to Baylor Hospital in Dallas and i was shocked to see that it was not a Green City...nor is making any attempt to become one. I could not locate any recyling spots and i noticed frequent persons would leave their vechicle running while parked, and running for 15 to 20 minutes... such a waste, folks just don't think about how precious life can be, especially our air and drinking water.

I do have a question for you. Do you believe in global warming or is this just another phase of our evolution? I have seen a lot of discussion stating that we are not destroying the ozone with our chemicals. (difficult for me to even consider that statement since my belief stems from native americans who treated the earth as their mother...if that population had not been assemilated perhaps we would all have a better life in the US).

hola grandma sunshine (i love that!).
in short... yes, i believe in global warming.

I had the great fortune to be at the Pyramids at Giza on Monday night, June 18. The alignment was right over the top of the second largest pyramid. It was absolutely fantastic! Thanks for all the information!