(for info on the late november 2008 planetary alignment: read this)

WOW!!! if you didnt get out tonight (sunday, june 17, 2007) to see the alignment of the moon, venus, saturn and regulus, you better get out tomorrow and the next night because it will just keep getting better!

just as the sun was setting tonight, i climbed up on my roof to see some gorgeous clouds, a sliver moon and an amazingly bright venus. the line of the 4 spheres was long and noticeable as the bright moon, venus, saturn and regulus were nearly equally spaced. from my view in the southern hemisphere, the moon was the bottom left, then up to the right went venus, saturn and regulus. from the northern hemisphere, their alignment started tonight with la luna on the bottom right with the planets and regulus lining up toward the left.

the moon jumps its position in our sky by nearly 12 degrees a night... it orbits all the way around the earth in one month, or about 30 days and there are 360 degrees in a full circle, so the moon moves about 360/30=12 degrees a night (see here for a more exact calculation... incidentally, this also means that the moon rises 52.7 minutes later each night!). this mean tomorrow night, the moon will line up just above venus, in between venus and saturn! the following night, it will jump again to occult (go in front of) the star regulus (cool)!

here are some simple 2 second exposures i captured.... 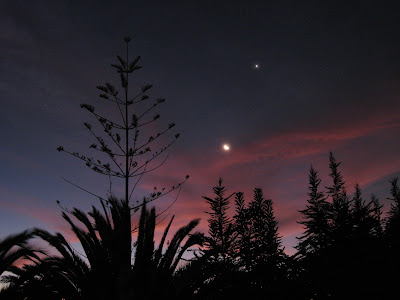 you can just barely make out saturn and regulus in this shot.... 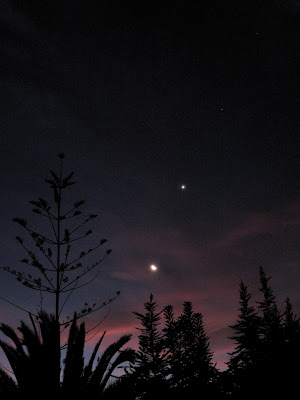 the enthralled photographer sits on her roof on a cold winter night! 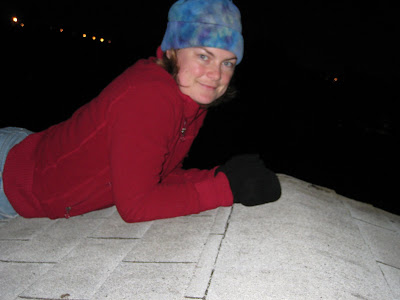 keep your eyes up all month as venus and saturn move closer and closer and closer together. their shortest separation will be just farther apart than the moon is wide occuring on june 30th. this month is awesome!!

It has been overcast here for several days. Is Mercury gone? It was still up the last time we had clear western skies...

i think you need a very keen eye to pick out mercury right as it gets nearer to the sun in our sky. i was able to see it 2 weeks ago just after sunset, but recently there have been many clouds on my horizon!

Hey! I don't know what state you are in, but I got on the computer when i saw the moon and the planets! here in utah, we have a crescent moon but you can see the little halo around the other side of the moon! i am taking pictures tomorrow night, when they are brighter!

cloudy for me tonight. :( anyone get good pictures?

How about 11 mm in the rain gauge.

I have a pic of mercury and Venus from the beginning of the month, here:
http://lablemminglounge.blogspot.com/2007/06/messenger-venus-flyby.html
Just ignore the doodles...

I had the great fortune to be at the Pyramids at Giza on Monday night, June 18. The alignment was right over the top of the second largest pyramid. My camera only picked up the moon and Venus but it was absolutely fantastic to see all lined up over the pyramid!