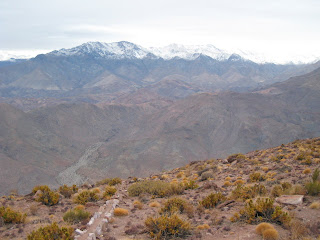 so much for star gazing during this week on the mountain top! eventhough its a new moon now, i'm stuck under the thickest layer of clouds i've seen over these mountains! weather sources last night reported that the freezing line would be at 3,500 meters which is higher than the 2722 meter (8930 ft) altitude of cerro pachon and the gemini-south telescope. when i woke up this afternoon, i saw exactly where the 3500m line is on the nearby mountains across the valley due to the nice layer of snow that appeared overnight! 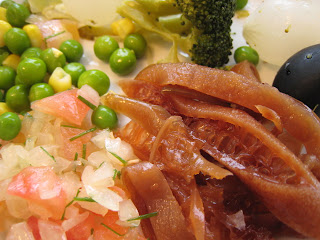 a while back i mentioned that i enjoyed the dinners at this observatory because there is usually some unidentifiable food item served. as i've lived in chile, i've become more familiar with the local delicacies and have recognized almost everything i've eaten on this observing run! i happened to have my camera with me at dinner tonight and (like a dork) took this picture of my salad plate. theres the typical broccoli, peas, corn, an olive, tomatoes and onions, and then... the mystery. i didnt know what that brown tubular thing was for a long time, and even saw it in its raw form at the farmer's market a few times before realizing what it was.... cochayuyo... a kind of seaweed! it's taste is not as strong as a typical green variety, but there is definitely a seaweed flavor to it. i've mostly seen it mashed up in stews more than served plain like this.

another feature of all night observing is the "night lunch". at this observatory, we fill out a form with many choices for sandwiches and other snacks and then receive a little goodie bag. i decided to be adventurous tonight and try something new. i got one relatively safe sandwich with ham, avocado, cheese and onion. there was an option for "jam" which i was a bit confused about. the flavors looked like the flavors of yogurt that they usually throw into my night lunch so i just chose the apricot. i also created a tocino sandwich, having recently learned that tocino is bacon. i mean, how could one really go wrong with bacon? when i received my night lunch i opened up the sandwiches to inspect and found that you can go wrong with bacon! one sandwich was covered with barely cooked, greasy bacon and the other had both pieces of bread smeared in sticky orange jam! hahaha! oops. i'm not saying that i'm not going to eat them when i get hungry, but i've never had a ham and jam sandwich before!