what is a melody?

i've discovered that chileans are very uncreative when it comes to naming streets. every city that i've traveled to in this country (that has at least two streets) has one named Prat and one named O'Higgins**. in general, when you find prat, you've found the main street and you know o'higgins will be cross somewhere nearby! arturo prat was a chilean naval officer in the second half of the 19th century who sailed on a ship called "O'Higgins" which was named after Bernardo O'Higgins - one of the commanders that freed chile from spanish rule in the early 1800's. 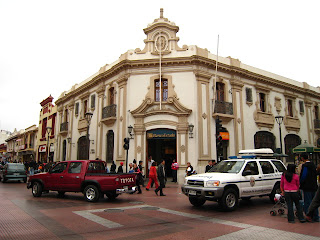 in La Serena, prat is a one-way, one lane street dominated by pedestrian traffic. the buildings are mostly two stories tall with shops at ground level and extended porches above. the small stores range from new to used goods, selling clothes, shoes, books, wine, electronics, dollar store stuff, office supplies, etc... vendors stand along the blocks selling a couple dozen manjar sweets. there are often people sitting on benches and others leaning against the building walls with paper cups extended for loose change.

after my spanish class this past wednesday, i was walking along prat wondering about who this historical prat figure actually was when my thoughts were dramatically disturbed by a loud, chaotic and persistent whistling sound. across the street was a man sitting with an overturned bucket and a cup on top. he held an old plastic recorder in his hands and rapidly moved his fingers over the holes as he blew continuously to make some of the most awful high-pitched sounds possible!! there was a slight twinkle in his eye like he knew he couldnt really play any songs, but he was making the effort to entertain, which in his mind must have been worth some monetary donation! i actually laughed out loud at this sight. i'm not sure why i found the situation so funny, but i stopped to survey the scene. i wanted to see how long he would continue "playing" and i wondered how others were reacting. i saw some cringed noses, but mostly people just walked on past without dropping any money. that lack of action says something because i've noticed people here are very generous with their loose change.

the man just kept on playing, so i walked across the street and dropped a 100 peso coin in his cup... i definitely felt entertained!

**almost every US city i've been to has a martin luther king, jr blvd

I also run the Space Feeds aggregator, which brings together the 20 most recent space blog posts from over 120 blogs (including this one), the 20 most recent news stories from three dozen space news sites, astronomy picture of the day, NASA TV, astronomy podcasts, and loads of space-related links. You might find it a useful tool.

did you take that photo?