run around the world. twice. 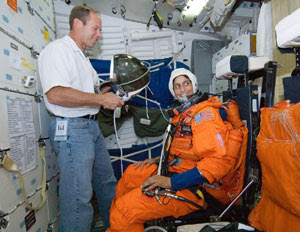 NASA astronaut suni williams will become the first person to ever run a marathon from space. i think thats worthy of a new category in the old guinness book of world records (although master google told me that it's really called "Guinness World Records". that sounds weird.).

anyway, suni williams, shown in the above picture with a shrunken head, 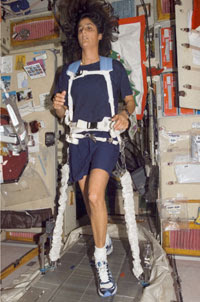 actually qualified for the 2007 boston marathon by finishing among the top 100 females in the 2006 houston marathon. she ran 26.2 miles in 3hr 29m and 57 seconds. 8 minute mile pace (on earth's surface)! that's awesome! she'll run the full boston marathon on a "stationary" treadmill. she'll circle the earth over two times during the race, moving over the surface of earth at more than 5 miles/second (=18,000 mph)!

the race is tomorrow, april 4th. give a cheer to the sky!