congratulations Barack Hussein Obama for being elected the 44th president of the USA!

i'm pleased. so pleased that i slept in after staying up rather late to watch the results (with a keen eye on ohio). i didnt make it late enough to see the speeches, but thought they were both appropriate and inspirational when i watched them this morning.

looking at ohio's results county by county, i'm still amazed at how distinctly separated the cities and rural areas are. nearly all the blue democrat counties harbor major cities or universities. cleveland went strongly democratic, and i'm pleasantly surprised that cincinnati didnt go republican (or all of ohio, for that matter!). 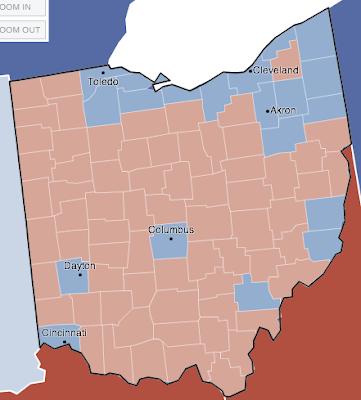 this seems to represent the majority of the country: urban voters choose democrat while rural areas vote republican.

i was also thoroughly impressed by the accurate results predicted by the fellas at http://www.fivethirtyeight.com/. their statistical methods are/were quite impressive! scientifically motivated statistical analysis - it works, bitches! 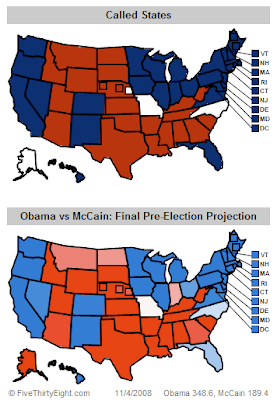 now i get to go about being one of the few americans that i know around these parts, so i'm constantly (and pleasantly) bombarded by everyone's opinions and questions about how the complicated US electoral system works. i must say i'm feeling more relieved and positive on this side of the elections!

one question that i dont know the answer to - what is the origin of republican states as red states and democratic states as blue? i thought i'd ask my personal blog-i-verse before reverting to the googlipedia ;) yippee!

Apparently, the thing with the colors started only in 2000, when NBC used those colors to identify republican or democrat votes...

wow, its really that recent? thats surprising. but i guess both the republican elephant and democrat donkey have blue and red in their caricatures. hm. thanks!

I am so excited. I mean really elated. Congratulations America on a truly HUGE achievement. I don't know how long it will take us get our economy and social systems together but I couldn't be happier that we finally elected our first president of color. We gain so much from valuing our diversity. We still are ignorant in America of the contributions to our country made by people from so many different cultures. I've always felt that I grew when I learned to see the world from another perspective. I owe a lot in my life to my African-American friends and teachers and the people who historically have led us on the path toward equality and peace. Congratulations everyone, this is an important, inspirational day. Someone sent around this text message yesterday: Rosa sat so Martin could walk so Obama could run so our children can fly. Today I am touched and hopeful.

as happy as i am for my country, i'll keep hopping around the globe as long as i continue to enjoy myself doing so!

unfortunately, its true that the value of the pound has dramatically dropped since i arrived :(

I was going to suggest that had things gone the other way you'd be very welcome to apply for British citizenship. Thankfully for you and the USA it never came to that. :-D