straight overhead during these summer months in the northern hemisphere, the constellation, ursa major, is visible throughout the entire night! ursa major is the constellation inside of which lives the popular asterism: the big dipper. an asterism is a subset of stars from one of the official 88 constellations that divide the entire sphere of our sky.

can you identify the big an little dippers in the night shot below?? the big dipper is easy to identify right now, even from inside cities. i can usually use the stars at the end of the pan to find polaris as well, but it takes a bit more patience and fewer city lights to spot all the stars of the little dipper. 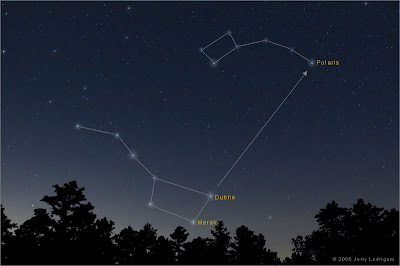 ursa major translates from latin as the "big bear." it's not obvious to me where the "big bear" imagery comes from when considering the pattern formed by stars that i familiarly identify as the big dipper.

the map below shows the outline of the constellation ursa major. all the stars withing the boundary are considered part of ursa major. the brightest stars that create the shape of the "big bear" are identified and connected with red lines.

here's one that highlights the stars that make up the big dipper.

i've been reading that in england, this asterism is called the "plough." is that correct? that'll be a good thing for me to know ;) some other names i've read about include the butcher's cleaver, the saucepan, and the great wagon, among others.

the stars in ursa major are not all at the same distance from us, ranging in distance from about 70 light-years to about 210 light-years away. since the stars move relative to each other in our sky, the big dipper will not always look as it does now. here's a short history of distorted big dippers from the past and future...

enjoy the view of the dippers!

i've been reading that in england, this asterism is called the "plough." is that correct?

Hmmm, I thought you were going to get on to the Ursa Major Moving Group.

It's called the Great Wagon in Italy! Although people call it the Ursa Major as well!