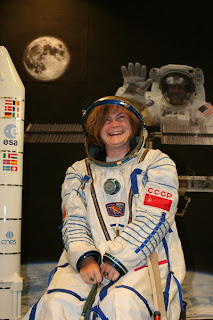 english speakers call them astronauts, derived from a combination of the greek words for star, "astron," and sailor, "nautes." many languages use "astronaut" as the base of their word for space explorers with the exception of the countries who have sent, or who are considering sending, humans into space!

Russians labelled them cosmonauts (kosmonavt, космонавт) by combining "cosmos" and "nautes." ive seen chinese space explorers refered to as Taikonauts, which might mean something related to the word "space" in mandarin, but i have no idea how to interpret what wikipedia says: "yǔhángyuán" (宇航员) or "hángtiānyuán" (航天员).... anyone?

the coolest new word that i've found for astronaut is a sanskrit-derived name, gaganaut! according to the professional pakau, "gagan" refers to the vast sky above us and more generally, to everything beyond the earth. i like the sound of this word, but i also like his comment that gaganauts sounds more like 10^9 nauts!

any other clever names to distinguish professional space explorers from recreational soace explorers?

Somehow the term "gaganaut" gives me the image of someone staring with gap-jawed incredulity at some astronomical spectacle through the visor of their spacesuit, as in going "gaga".

Only peripherally related, but let's not forget the Evernaut and the Supernaut.

Thanks for dropping by at my blog and for the link too! I'm glad you liked the comment on 10^9! Like I said in the post, I would prefer Indian astronauts being called "Antariksha Yaatri" rather than gaganauts :).

I see you are quite an enthusiast when it comes to Astronomy. I've restricted myself to daily religious dose of "Astronomy Picture of the Day" and the occasional star gazing.