no, it wasnt a fantastically thrilling final match of the 2008 euro cup, but i was still entertained. disappointed that my team didn't win the whole thing, but their aggressive energy at the beginning of each half gradually wore out without them scoring an actual goal! on the other hand, i was thoroughly satisfied with the winning goal (video) put forth by fernando torres... the only goal of the game. as the scoring play unfolded, i thought there was no way torres was getting around lahm with enough time to hit the ball, so i nearly missed his quick flick to goal as i reached for my beer! so quick... so great! congrats espana! 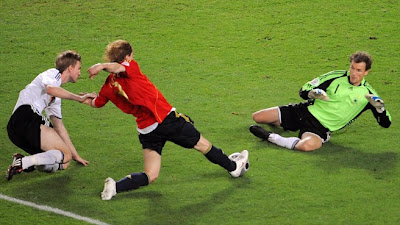 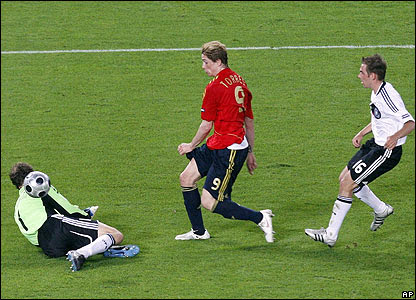 i'm sure i will now enter a small period of soccer-watching withdrawal...

good thing i'll have ample family entertainment in ohio for the entirety of july, and a whole season to look forward to once i move to the UK in august! i havent kept up much with MLS lately. any thoughts on which team i should follow? i havent chosen one yet. the obvious choice would be the nottingham forest, since that'll be my new hometown team. but what about liverpool? arsenal? thoughts?

Hi astropixie - I told you España was going to win!

Ah, while in the UK I'd recommend to follow either (a) Man U, or (b) West Ham if you're into underdog teams. Hint: what do (did) they have in common? Good luck in the UK.

Sorry if this double posts,

I'm kinda new at this.

As a Brit raised in Canada I suggest Sunderland, SAFC. No trophies this year but will be dangerous every match and Roy Keane is always good for a sound bite.

BTW I operate a power station on night shift and owe you and your fellow science bloggers a little love for keeping me awake when its slow.

Guess thats my version of

I had posted my reactions to final immediately after the game.Germany went off my radar since 1990, though I want to live in Germany (even learnt Deutsch way back) someday :).

English Team - Though I supported Gunners when Thiery Henry Played for them. I have been following pursuits of Liverpool since I saw their clumsy striker Crouch in 2006 WC. My pals call him Camel :D

fyi, i think man u and chelsea are out... i wasnt impressed enough to latch on to either team after the champions league final last month. keep the suggestions coming though!

thanks for participating electro!