i was half right on the semi-final match ups, but i still could get the right teams in the final! we'll see. i definitely think spain deserved to win today. italy finally showed the strength of their defense, but failed to attack consistently. maybe luca toni's mustache repelled the ball from coming to him, or maybe it was the missing play makers: pirlo and gattuso. my biggest hope is that this ref sits out the rest of the tournament! 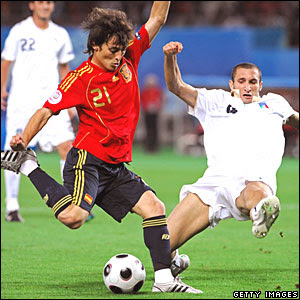 i was glad to see germany step up in their QF match against portugal. i was pleased to see them score a fantastic goal that wasnt initiated from a set play. in the end, i think it was portugal's weak defense against germany's powerful set plays that cost them the game.

the croatia - turkey match started out sloppily, but they settled into a decent rhythm. unfortunate shoot outs for croatia, but what an unbelievable last few minutes of overtime play!

the netherlands started out slow against russia and played too conservatively to pose an offensive threat.

i'm still going for a spain against germany final.... but you never know what could happen in a given match in this sport!

I was right about Portugal but wrong about the Azuri :(, Rightly said, azuri lacked were good playmakers.Something that has been missing since Departure of Baresi. Gattuso has more of makings of mafiosi than defender.He is always living dangerously on the pitch

My Euro campaign is over. Whoever wins from here is just for the records...

you have luck fat girl

It’s quite appreciable that such information is being shared through a huge network. Keep it up.