these photos are stunning! 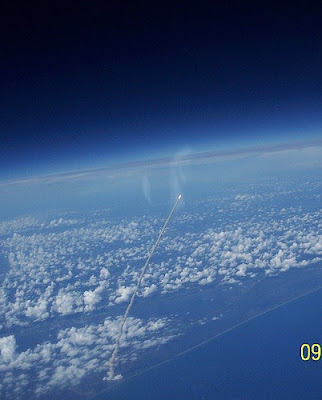 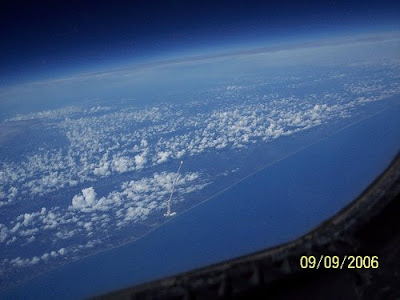 there appears to be a bit of controversy as to to whether these images were captured from the international space station or from a high-altitude plane. i couldnt find the original source of the photos, but they're still fantastic regardless of where they were taken!

UPDATE: flyingsinger performed a cool simulation experiment which he has shared on his music of the spheres blog. now i'm pretty convinced these shots were not taken from the ISS!

They were taken from an aerial chase plane.

Thanks Amanda. Another blogger commented on my post with a link to a 2006 forum discussion on these photos on nasaspaceflight.com that says the photos are from NASA WB-57 aircraft.

BTW, I assume the (now missing) "Dr" on your blog header means you finished your PhD. Maybe I missed a post about this, but in any case, congratulations Dr. Bauer!

Six years later the picture is back, but now in a bizarrely manipulated form with the background clouds out of focus. High five to Tineye.com, by the way, which led me to this old posting here and - thanks to Flying Singer's remarks - the origin of the image.