redshift and the distance to distant galaxies

this weekend i gave a public talk entitled a long time ago, in galaxies far, far away. it was great fun to prepare and present a talk with pretty pictures after giving so many technical talks lately! based on the responses i received, i thought i would share a popular segment with everyone here! 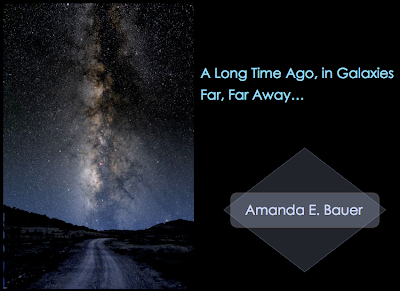 in order to talk about galaxies far, far away, you have to know how far away the galaxies are! it turns out that determining the distance to astronomical objects is not a trivial matter! for very distant galaxies, the best way to determine their distance is by looking at their spectra in order to determine their "look-back time" or their "redshift."

to do this, we point a telescope at a galaxy, collect the photons of light coming from the stars in that galaxy, and then send those photons through a complicated prism system, in order to see the galaxy's rainbow! 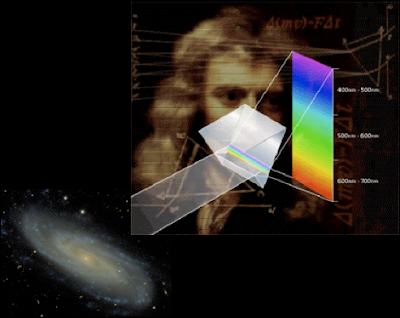 the different colors of the rainbow correspond to different wavelengths of light. 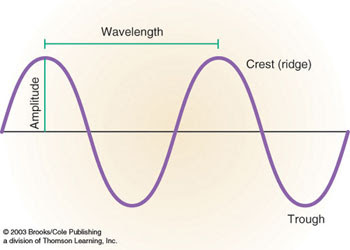 each galaxy has a unique rainbow fingerprint ("spectrum"), although some general properties are universal. the simple rainbow fingerprint below shows a nearby galaxy that has several lines, produced by hydrogen, in its spectrum. the existence of these lines and the relative spacing between them are well understood by physics and quantum mechanics.

since light has a finite speed that it travels (the speed of light is 300,000 km/sec or 670,000,000 mph!), it takes light from a distant galaxy some amount of time to travel through space to us! when we determine how long the light has been traveling thru space, we know how far away the galaxy was when it released the photons of light that eventually landed on our lucky telescope! this time is called the galaxy's "look-back time" and goes from very small up to 13.7 billion years (the age of the universe).

the key piece of information is that the universe is expanding!! as the light from a galaxy innocently travels thru space for a couple billion years, space itself is expanding! as the light wave travels, space expands and the wavelength of light gets stretched out with space!

the original wavelength of a photon of light when it left the galaxy, is stretched out as it travels thru space so that it is a longer wavelength by the time it reaches us and lands on our telescope mirror. each of the lines from hydrogen are shifted to longer wavelengths! 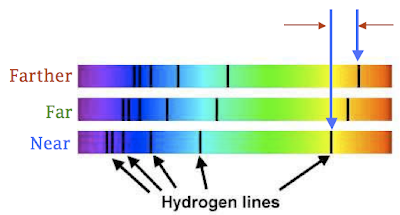 we compare the spectrum of a distant galaxy to a very nearby one to see how far a particular line has shifted. the farther the shift, the farther away the galaxy, the earlier in the history of the universe the light was produced inside the galaxy! from the amount of shift of a line in a galaxy's spectrum, we get the galaxy's redshift which is a number between zero and something very large (greater than 100). note that what i've described is the galaxy's "cosmological redshift" (as opposed to a doppler redshift). 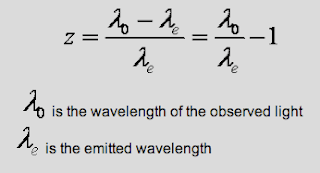 a galaxy with a redshift of one (z=1), emitted the light we observe about 8 billion years ago, when the universe was about 6 billion years old!

here's an example of a real two-dimensional galaxy spectrum, showing the intensity of various lines of hydrogen in addition to oxygen and sulfur. 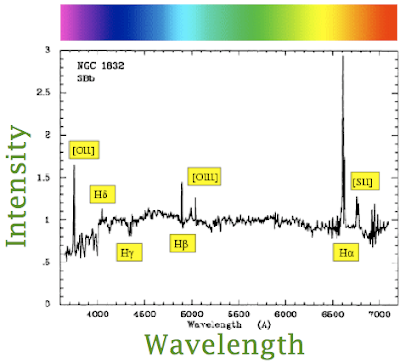 haha... yeah, i know the proper spelling, i just think its a waste of letters. please pardon my stubbornness!

LOL... there was nothing simple about this!! But I did enjoy reading and pretending that I could be an astrophysicist!!

well done on the production of this site!!!!
I have a fox moulder like interest in all these subjects... and it would be nice to have a conversation with you regards some of these subjects!
my email address is coyoteduffy@yahoo.co.uk please omit from any blog!!!
If you would email or wish to talk to me, please do as I am very curious to your interest and how involved you really are?

call me simple minded but..

i still have trouble with the expanding universe. What's pushing it apart?

maybe this fellow's "neutron repulsion" is the next fundamental force to be found. Were it proportional to d^1.4 or so instead of d^2 there'd be some distance at which it would out-push the pull of gravity.