did anyone get up early enough to see the conjunction of venus and jupiter? i almost did, but not quite. let me know if you got any good pictures!

this afternoon, i'm leaving on a jetplane for the spanish-speaking wonderland... chile! i'm extremely excited to be heading back to my home of most of 2007!! the main purpose of the trip is for a job interview (think good thoughts for me!), but i also plan to visit old friends, drive to the mystical valley, drink some pisco sours, eat an empanada or four, hopefully listen to fantastic folk music, and lounge a bit on the beach! 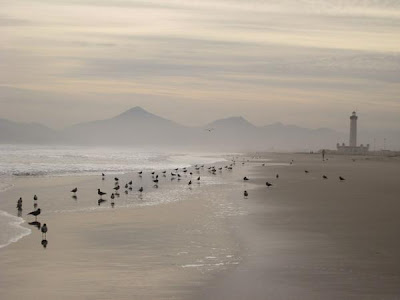 i might not be able to post much while traveling, so i leave you with a challenge... enter the darwin valentine's day card contest being held by the skepchicks!!! i think this is a hilarious idea, and i'm feeling inspired to try to come up with something even half as clever as the one they share...

Best of luck with the interview Amanda! Have a Pisco Sour and an Empanada for me, I miss them so bad!

I was at a sunrise Wedding Saturday, and they were close but not amazingly close. The moon was less than a diameter from Antares, though, which I didn't expect, and it was fun watching it and Jupiter slowly disappear as the morning sky got brighter (then clouds ate everything).