the US space studies board has put together an international public seminar series called "forging the future of space science: the next 50 years." this year marks the 50th anniversary of the international geophysical year which saw the launch of the first satellites: soviet union's sputnik, the US's explorer 1; the creation of NASA, and the beginning of the space science board! while reflecting on the last (first) 50 years of human space flight, this seminar series attempts to activate young minds to consider the possibilities for what the next 50 years of space science could bring!

while the current generation of UT graduate students and postdocs were encouraged to participate in the panel discussion, the panelists definitely represented the previous 50 years of space science! here are three of the distinguished old white men panelists: 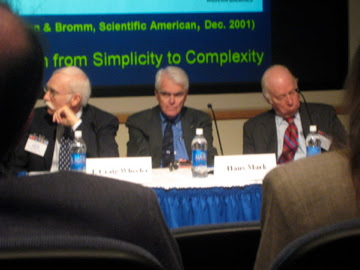 (i couldnt stop giggling in my seat as i sat there watching some of them closing their eyes and bobbing their heads, so i took a picture :)

on the left is UT astronomy professor, president of the american astronomical society and consistent bearer of a rocking 'stache - j. craig wheeler. in the middle is former deputy administrator of NASA and current UT aerospace engineering professor - hans mark. on the right is nobel prize winning physicist and current UT physics professor - steven weinberg.

the panelists spoke briefly about how space technology has prominently affected their research over the years, but i was hoping to hear a bit more about their visions of the future of space science. weinberg didnt disappoint with his candid negativity towards manned space flight, specifically regarding the moon-mars initiative proposed by G. W. Bush in 2004!

i thought the best part of the discussion began when the audience joined in. i jumped up to say that i wanted to hear more benefits about the science resulting from manned space flight. i didn't initially support the moon-mars initiative because i did not trust the motives of the man who proposed it, but more importantly, i did not like the way NASA'a budget would have to transform itself to meet the demands of this new plan while not fundamentally increasing. the direct drawback to my particular science would be decreased funding for the james webb space telescope: the only planned successor to the hubble space telescope.

a couple graduate students from the aerospace engineering school pointed out that science would come from going to the moon and/or mars: properties of fluid dynamics, for example. it was also pointed out that while robots are useful technology, it takes the mars rovers 2 days to turn around and dig a shallow hole into a rock face, where it would only take a human a matter of minutes.

their major claim was that it is arrogant to discount manned space-flight as not scientifically useful just because one's own "science" might not be benefited. this is a point i take to heart as it is directly pertinent to my apparently selfish astronomer views!!

but i am not convinced that sending humans to deep space will teach us more than the effects of deep space on humans. let's send 100 robots to mars instead of a human, because ultimately, that would be cheaper. weinberg claimed that if we had built many hubble space telescopes to launch into space, in the event that things went awry, instead of sending astronauts on servicing missions to fix the telescope/instruments, we would have saved a lot of money for performing just as much science.

and let's not forget that exploring space is COOL!! exploration is an exhilarating experience for human beings and necessary to learn more about our local solar system and the universe beyond. focused questions pertaining to the existence of life, the origins of earth, etc... should be asked and answers should be sought!! but i dont think our best immediate move is to send humans. lets send lots of robots of increasing capability and when/if they find something excitingly unexplainable.... then lets send humans! weinberg makes the statement that exploration of space is a good, beneficial thing, but NASA shouldn't tout manned space flight as a misleadingly strict "scientific endeavor."

all this being said, if i was invited to be an astronaut, i would go up into space to experience weightlessness in a second - without hesitation!!! however, i think this statement supports independent spaceflight and not manned, NASA-funded missions.