why do we kiss?

kissing is fun, for sure, but it doesnt directly benefit us in an evolutionary sense, so why do we do it? what initiated the regular act of kissing thousands and thousands (or millions?) of years ago? and why is that some percentage (~10%) of humans don't kiss?

the scientific term for kissing is osculation (scientists sure have a way at wiping out the romance even from one of the most romantic acts possible, dont they?!). there was an interesting article this week in scientific american describing new research as to why we kiss. one thought is that kissing evolved from when primate mothers chewed food up for their young and then fed them mouth-to-mouth. i can see how that tender and originally necessary act, developed into something that could occur to show affection, even when sustenance wasnt involved. 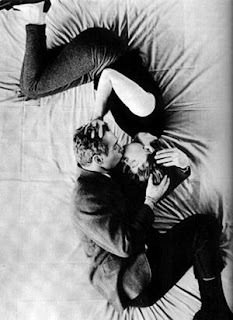 another thing i learned from the article is the human lips "enjoy slimmest layer of skin on the human body." our lips are also very densely populated with sensory neurons and so are especially sensitive to slight touches. hm. this gives one reason why kissing is so enjoyable, but doesnt describe the benefit of kissing, in the sense of giving a reproductive advantage.

the punchline is that kissing remains as big a mystery as the question of why we fall in love. but for me.... this mystery is a good thing!

No doubt you know that, in the presence of perturbations, the orbital elements of a planet/satellite/etc. change. These changing elements with time are called the 'osculating' elements...