this image of jupiter and its largest moon, ganymede, was taken by the wide field planetary camera 2 (WFPC2 = "wif-pic-two") on the hubble space telescope. three images, taken april 9, 2007 in red (673 nm), green (502 nm), and blue (410 nm) filters, were combined to produce this sharp color capture! 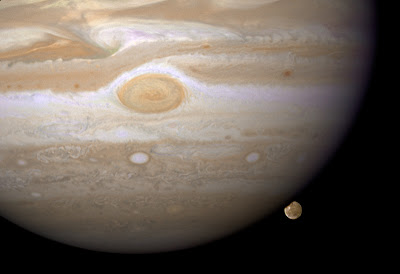 hubble took a series of 540 pictures over a two hour period as ganymede appeared to approach the giant gas planet and disappear behind it! you can watch these images together as a great video at the hubble site.

here's an interesting image showing the scale and orientation of the observation. the white line at the bottom represents 25,000 miles (40,000 km)! consider that earth's diameter at the equator is only about 8,000 miles (12,800 km)! 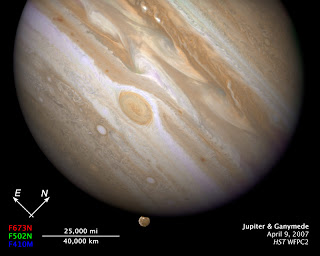