this week's carnival of space collection of astronomy-reads is us at collectSPACE. there are several interesting articles to tackle, but one especially caught my interest.... ian musgrave has inspired me to attempt to spot the super bright planet venus during the day!

venus is that amazingly bright object shining in the southwest evening sky right now. i've been watching it, so i have an idea of where it sits as the sun sets. i'll try to go out a little earlier each evening (well, afternoon really, considering the sun is still setting ridiculously early these days) to see is i can spot it. its easiest to see venus during the day when the moon is somewhere nearby as a beacon. at the end of this month (jan 29th and 30th, 2009), the crescent moon will pass very close to venus so we will be able to see them both together during the day - one of my favorite events! (and maybe, just maybe, it wont be raining here in england so i can actually try to spy the daytime alignment!). 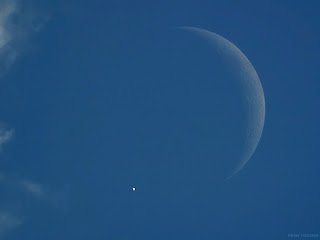 this daytime venus photo was taken by peter heinzen during an eclipse in june 2007.