at the beginning of this year, i was nervous about getting a job. finally, i received a few offers and was excited to have a choice about my future position! my life would continue after the phd! but then i noticed on the astrophysics job rumor mill webpage, that another postdoc was also hired. i wasnt aware that the position was for two people, and i immediately felt suspicious and self conscious... who was this person?

so, of course, i searched her out online. for some reason my immediate reaction was not to look up her scientific publication record demonstrating her research interests, rather, i went straight to google to search for her public personality profile! the only thing i found was this video, and an introduction to a fabulous project called dance your phd:

i was *so* impressed that i didnt even bother looking up anything else about her. i knew she would be cool because (a) she entered such a great contest, and (b) she finely demonstrated a full understanding of the subtleties of galaxy mergers! when their arms reach together as she passes by him, representing the trailing paths of disturbed gas... tidal tails! bravo!

and as it turns out... we're beer twins. perfect! 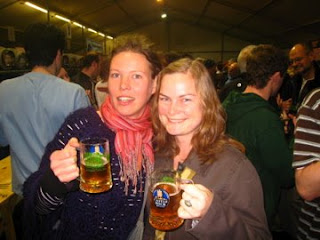 since beauty,
happiness
and freedom,
they lie in the
absence of sense

twins in beer and
attitude of mind,
legal aliens we will be

I clicked on your site because you like Waking Ned Divine too but little did I hnow I'd find another human sharing my One Big Eye. affliction.

Now there are already two of my friends on your blog ;)

(btw: if you are interested in embarrassing pictures of ruth, just tell me. maybe they could be useful for some future blackmail ;) if not, they are at least very funny ;) )

you featured my song before, "seminarcolepsy". Can you advertise my Dance your PhD entry too?

Watch it many many times and tell your friends!
http://www.youtube.com/watch?v=nXfBhCAsqpg

Here's another good example of the "Dance your PhD" contest entries:
http://www.youtube.com/watch?v=_IUVkMXd_c8