if you're near albany, new york on november 1st, check out the black book project by the ten 27 jazz trio.

"An eclectic mix of original jazz compositions and magnificent images of the cosmos from the Hubble Space Telescope are combined in this unique performance by TEN 27 featuring Monica Wilson-Roach on electric cello and bass, Michael Roach on keyboards and piano, and Paul Borrello on mallet-kat and drums."

according to the american astronomical society newsletter, Monica Wilson-Roach wrote the cosmology-based jazz composition in honor of vera rubin - one of my astronomical heroes! vera's perseverance to study the universe, despite being discouraged from studying science because of her womanhood (princeton said "no thanks" to her and all other women until 1975!), helped create a more benevolent atmosphere for me to pursue my studies today!

From Ken Croswell’s The Universe at Midnight (via cosmic variance):

vera rubin contributed immensely to our understanding of the composition of the universe. she provided clear observational evidence that something non-visible existed inside galaxies. 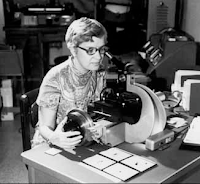 in fact, she found that there was 5-10 times more of the non-visible stuff in side galaxies than the visible stuff that produced the light for our telescopes to collect!

to do this, she looked at spectra of many galaxies in order to calculate the speed at which stars orbit around their galaxy centers. the speed of the star around the center of the galaxy is proportional to the distance to the center and how much stuff is between the star and the center. this is similar to planetary speeds - neptune moves much slower around the sun than the earth does because it is much farther away. vera measured the speed of the stars at the outskirts of galaxies and realized they moved way faster than they should, after taking into account all the visible material inside the star's orbit. therefore, something else, something non-visible, something dark, "dark matter" existed inside the galaxy to gravitationally speed up the stars rotating around the edges.

i was lucky enough to meet vera at my first AAS meeting while i was still an undergraduate student. the woman who introduced me made it a point to tell me a bit about vera's history beforehand, and i remember being very excited at that moment! thanks for your inspiration, vera!

therefore, something else, something non-visible, something dark, "dark matter" existed inside the galaxy to gravitationally speed up the stars rotating around the edges.

So, MOND and any similar theories have been shown to be wrong?

I have no opinion one way or the other: it's just that to an outsider like me it does seem that astronomy has rather jumped to conclusions on this one. At the very least I think statements about dark matter should be qualified to indicate they're still a little bit more hypothetical than some in other areas.

Well Ed, MOND has pretty much been disproven. People have long had trouble getting it to match with the successful predictions of General Relativity. With observations of the Bullet Cluster, you have to go through pretty extreme mental gymnastics to think that MOND is still tenable.

I think it is fair to say that we shouldn't have to label dark matter as "hypothetical" anymore. Keep in mind Vera Rubin showed something was odd with the motion of stars in galaxies 30 years ago. Even before that, in the 1930's, Fritz Zwicky noticed that galaxy clusters had to have a lot of unseen matter in them. That means astronomers have been dealing with this for 75 years! In that time, we've progressed from asking questions like, "Is there dark matter?" to asking "What are the properties of dark matter?". We are even getting answers! We know dark matter is cold (i.e., it moves at speeds much less than the speed of light). We know there's lots of it, it dominates the mass of galaxies and clusters of galaxies. We know dark matter doesn't form compact objects like stars, because we have made surveys that would have found them.

I think one of the sources of your skepticism is that no one has been able to make a direct detection of dark matter. Of course it isn't for lack of trying--direct detection of dark matter is a slam-dunk Nobel Prize. A similar skepticism plagued science when atoms were proposed to be the fundamental building block of matter. Folks like Ernst Mach refused to accept the reality of atoms, partly because no one could really make a direct detection of them. We didn't spend a century referring to atoms as hypothetical. Eventually, the indirect evidence for atoms became so overwhelming it was accepted as a starting point for further research.

I make a big deal out of this because science often advocates skepticism, but we can also be too skeptical. Creationists love to be hyper-skeptics. Michael Crichton is so stupid it burns when he goes overboard with skepticism. There is this brand of argument that basically says that since there are unknowns and uncertainties, we can never draw strong conclusions. Creationists claim that since we don't have direct observations of massive evolutionary changes, we should label evolution as hypothetical (or just a theory). Global warming deniers point to uncertainties in climate simulations and say we can't be sure if humans are driving climate change. We should all practice skepticism, but for science to progress, we need to eventually promote the hypothetical to the accepted factual. I'm not saying I believe in dark matter as strongly as I believe in atoms. But I think it's important to recognize the progress we have made from asking "WTF is wrong with those observations Vera is making?", to "What other properties of dark matter can we measure?"

OK, from that reference it appears that the evidence from the Bullet Cluster observations is somewhat stronger than I had understood it to be. I would point out, however, that dark matter was being discussed as "fact" well before August 2006.

There is a difficulty, though, with science in labelling how well something is known when talking to the public. If theories of atoms or evolution where found to be false it would be so amazingly surprising as to totally rock the foundations of science. If dark matter was found not to exist it would be big news but wouldn't result in most astronomers and cosmologists falling on their swords in shame.

The AGW skeptics are an interesting case. One of the items they point to is the supposed predictions of global cooling made in the 1970s (I think it was). This was a case of a fairly speculative idea by a few people being taken as "scientists say...".

We're never 100% certain and there is rarely a single observation which gives unambiguous proof (of truth or even of falsity) but a gradual accumulation of evidence that results in a progression through a wide range of certainties from 90% to 99% to 99.9999999%. With lots of nines it doesn't really matter how many - we can just talk as if something is "true" but when there are only a few nines some care needs to be taken.

For example, if dark matter and AGW are both about 99% or 99.9% certain (my feeling - I've looked into AGW a bit more) and people understand that level of certainty then if one or other theory needs heavy modification it wouldn't reflect badly on the other. On the other hand, if people perceive scientists to be saying that absolutely all doubt has been removed then modification of one theory will damage the credibility of the other.

you both make interesting points. thank you!

i should write up a proper post about dark matter and MOND soon, but for now... people are still publishing papers using MOND and investigating the associated relativistic theory of Tensor-Vector-Scalar gravity (TeVeS - TeVeS is to MOND as general relativity is to newtonian physics). from listening to particle physicists talk, the calculations involved with TeVeS make general relativity look basic (not that that really matters).

cold dark matter cosmology can resolve many observed phenomena based on physical principles, whereas MOND and TeVeS horrendously complicate matters when tweaked to try to explain newly observed phenomena, like the bullet cluster. such is the difficulty with empirically derived explanations.

it will be necessary to somehow detect dark matter - in the form of a dark matter particle (neutralino? axion?), i think, in order to fully disprove MOND. but for now, either way, the galaxy evolution i observe still happens regardless of how we describe gravity.