in this case, i'm referring to the european space craft named jules verne, which just descended from orbit. in march of this year, i described the awesome triple flyby that we saw when jules verne approached the international space station (ISS), just after NASA's space shuttle endeavor undocked from the ISS! it's six months later now, jules verne successfully delivered the supplies it needed to deliver to the ISS, and it was time to return to earth's surface. jules verne was sent thru a de-orbit procedure that allowed it to re-enter earths atmosphere, break into several pieces, and crash the remaining pieces into the pacific ocean! you can watch a video of the event: HERE. 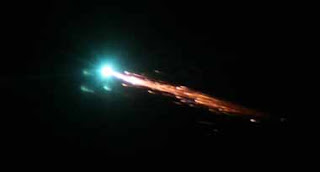