i'm so disappointed that there are multiple pictures of the current president of the united states that make me so uncomfortable, i shudder. this occured at the olympics this week. 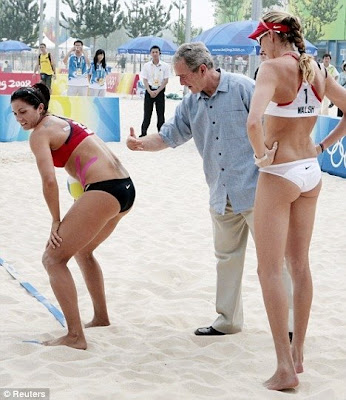 i know photographers try to snap photos at moments of blunder, but...

he also attempted to give the german chancellor, merkel, a backrub at the G8 summit in 2006, which resulted in these shots: 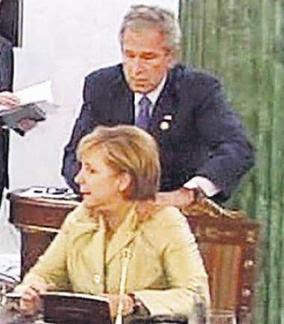 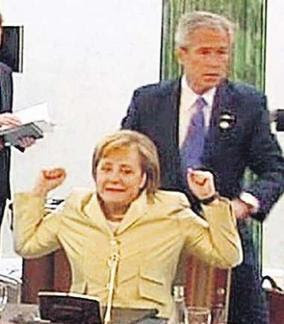 by the way, did you hear the one where the US president left the G8 summit meeting by saying "Goodbye from the world's biggest polluter!" ?

That's it... I'm never voting for him again!

I hate to defend him, but the volleyball player in question did ask him to slap her bottom. He instead hit her back. Either way, he was going to look bad.

In the case of the backrub incident I'm not sure what (or indeed if) he was thinking, but on the other hand Misty May-Treanor must have had a rush of blood to the head inviting the Commander in Chief to swat her behind for luck. Way to improve your country's standing overseas. Not to worry, I'm sure you'll make a much better ambassador. ;-)

Interesting responses there - for a legal Alien to tell he can only run for the office twice , so you can vote him for third time doesn't tell good about the voters here :D.

APixie - I guess this is part of GWB's once a year camera gaffe programme I guess. Heard about his famous Scooter, Pretzel and caught in undershirt pics? Google search will give you those.

And nobody commented on the Polluter comment. Thats how rest of the world percieves, the intentions of US when it comes to Environmental issues :D

On side note - looks like you have started reading the British newspapers :D


By reading Mothers Daily Wisdom, you can learn and appreciate many things. There truly is a company offering honest credit repair. If you need some good luck in buying things on ebay, always go to the Lucky Ebay Website before bidding. Following Election 2008? Do research on the candidates at the sites: John McCain and Barack Obama For website SEO, and to learn how to optimize a website, visit the community and learn together. It’s a team effort.