my new year's resolution is to run the city2surf race that occurs in sydney each august. city2surf covers 14 km (8.7 miles) from downtown sydney to the internationally known bondi beach. apparently, its the largest fun run in the entire world, having attracted 80,000 runners for the 40th race in 2010!

i decided before i came to australia that the move across the world would be a good time to start running again. i was reasonably active in england, but the pub lifestyle did not really compliment my physique. so i bought a nice pair of running shoes when i arrived in sydney and i've been running steadily for almost two months now.

then i found a running group to join and last night i went for my first run with them. we started in my neighborhood, went across the harbour bridge, around the opera house, and back. i've been on worse runs before! the area surrounding the opera house is all decked out for the massive fireworks celebration tonight, which i've been warned will be insanely packed with people. cant wait :) 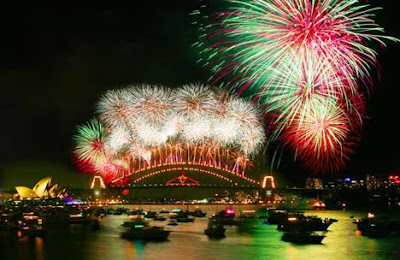 at 4 miles, last night's run was the longest i've completed in years, but i have to say i have no intuition for how long it takes me to run a kilometer - i still think in minutes per mile! the run was slow... but i completed it with only one little bit of walking! woohoo! the group was great and i estimate that the average age of the runners is about ten more than me, which gives me a bit of hope.

the craziest part about this new year's celebration is that i will be in an entirely different decade than most of you for almost an entire day! weird. but still...

when i was in a flux, dealing with personal issues that were interrelated, health and relationship, my conditioning suffered. For a cat who could run ten miles at the drop of a hat, it was humbling to walk-run ONE MILE!!

I built myself up and can do a steady 5 or miles... but I have not ran that far in Omaha... there are too many hills!! It isn't the climb (though there IS that to contend with) but coming down hill is where you can suffer injury from having ligaments and tendons stretched awkwardly.

Good for you and keep it up!!

Once you can go 4 miles, 13 miles is a no brainer. The only problem is the joints.

Hey great going!! Many congrats and Happy New Year to You. Hope the new year helps you accomplish your running goals :)