i know the matches can last for days and i know that my friends in england, who care about cricket, are very excited that im in australia right now. apparently they feel i am somehow obliged to be happy (and brag?) about england's recent performance.

anyway, while i lived in england i was too excited by all the soccer games i could watch to bother paying any attention to learning the rules of cricket or rugby. notice how i called it soccer instead of football? thats because here in australia the word football could potentially mean like 3 different sports, so i've cut out all ambiguity and gone back to calling my favorite sport simply soccer!

i'm at a loss when it comes to popular sports in australia because there is rugby league, rugby union, cricket (and apparently test cricket), aussie rules football, and good old soccer. this SMBC cartoon summarizes my knowledge... just substitute any of the above for football except, of course, soccer. 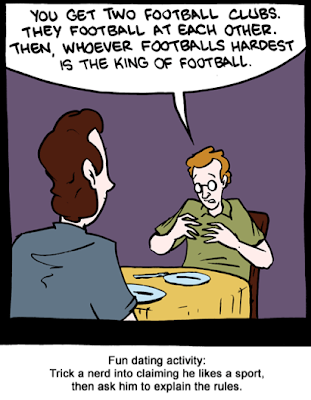 That would never work on me. You'd be hard pressed to get me to claim I like a sport.

Whenever I am with a woman and I explain football, I do so in soap opera form. Makes it a lot easier for them (and me!) to follow rather than explaining what a sweep play is or why the cover two defence didn't assign a line backer to cover a pass route!!

Its interesting for you to hear about Cricket and Ashes rivalry, you had to travel down under, and you didn't hear any of it in home of cricket (England). Kind of tells the sad state of game and fan following the game has in England where now soccer (football) is the better marketed sports.

England-Australia rivalry in Cricket is akin to Viking-Packers in NFL, where more pride is at stake to win series when they face each other. Of course current Australian side is shadow of its former self. A big part of the downfall is their uninspired leader Ricky Ponting
http://en.wikipedia.org/wiki/Ricky_Ponting

No surprise that he took charge of healthy and all conquering team and converted it to punching bag of all rivals.

Its not a surprise that he resembles Ex-Prez of USA

'Test' cricket is the longest and most highly-regarded form of the sport. Apart from that, it's played just like regular cricket. ^_^

It's only played between the most established national teams (i.e. tests are always international matches).

A test lasts for up to 5 days, with about 6 hours of play per day. I guess the name comes from the fact that they are a 'test' of physical endurance (although the players do stop for lunch at about 1pm each day!)

Football / soccer is great, but cricket is awesome in a different way. It's so enjoyable to spend an entire summer day with some mates, sipping cold beers (and maybe having a picnic) while watching some cricket. Unlike football, it can be a relaxing experience even if your team is playing poorly!