this is the sort of image that really makes me appreciate studying the universe every day.

on its own, the photo below shows a gorgeous image from the hubble space telescope that reveals incredible details of the spiral galaxy NGC 4921, which lives 320 million light years from earth. the fuzzy light from this galaxy is created by hundreds of billions of unresolved stars whose glow blurs together to produce the overall shine. 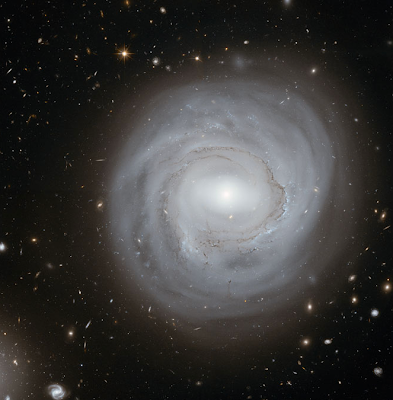 to create the above image, 50 separate exposures through a yellow filter and 30 more through a near-infrared filter were combined so that the total exposure times were approximately seventeen hours and ten hours respectively. thats a lot of telescope time on one galaxy! with that much time, you can see a lot of unexpected details in the background.

in fact, look at this zoomed-in bit of the image above... (click to enlarge) 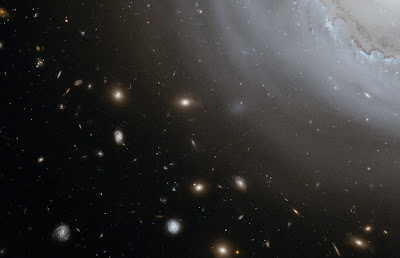 nearly every single one of those small smudges is an entire galaxy harbouring hundreds of billions of stars and gas and dust and probably a supermassive black hole in the middle. incredible. there is SO much out there in the universe!! i'm very grateful that i can sit here in my earthly smallness and think about it and admire it.

Boy, that is an amazing image.

As many flaws as the universe has, it still looks neat.

this is just fantastic! what a incredible universe we live in... unfathomably diverse and and vast. I'd like to go outside and gaze at the full lunar eclipse that is about to take place... but there is a big storm settled over us here. Thanks for posting these :)