the moon's shadow on earth

i'm off to china this morning - to go stand on the earth where the moon's shadow will quickly pass over on wednesday! i have 15 hours in the air and many more in between to look forward to. i'm excited and nervous... and exhausted! i'll keep you up-to-date as much as i can about the solar eclipse and surrounding events!

here are a few images of what the moon's shadow looks like from above earth's surface! astronauts on the MIR space station captured this photo of the august 11th, 1999 solar eclipse! 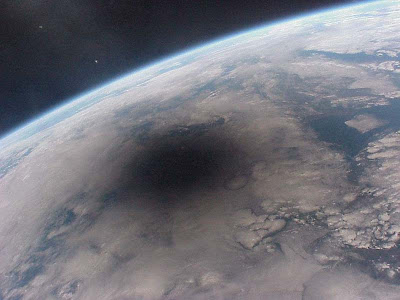 the dark spot shows the area on earth where one sees a total solar eclipse. the shadow is only about 100 miles wide and moves across the earth at a few times the speed of sound!

here is an image taken from the international space station on march 29, 2006: 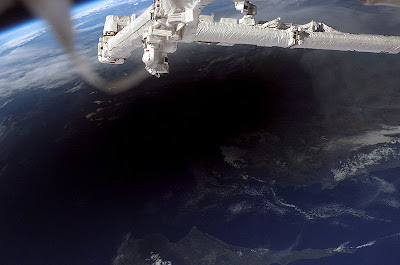 may the clouds not be with us!

oh my! aren't you a busy little bee! have fun on your trip! i loved those pictures! i never thought of the moon actually casting a shadow on the planet! neat i learned something new today!

Imagine if it crossed a less educated part of the world like Oaklahoma. There would be a lot of "Wha dat?!" & definitely no astronomers.