mission to the moon

NASA has a fancy new logo in honor of the apollo rocket successes the 1960s. the main accomplishment was the apollo 11 mission carrying the first human beings to ever step foot on the moon. today, july 16th, was the day the apollo rocket launched 40 years ago with three excited astronauts on board: neil armstrong (left), michael collins (center), and buzz aldrin (right). 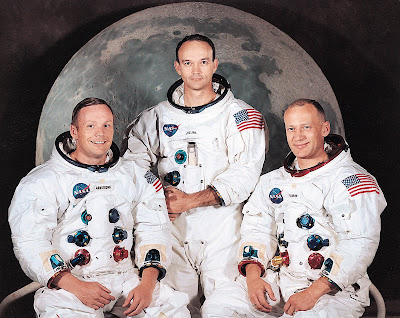 those three lucky and persevering men landed on the moon on july 21st, 1969. i'd love to hear stories from people about their memories of this date. did you watch the event in the living room of a neighbor? with your family? did you hear stories from your parents or grandparents about their memories of the historic moment? were you or your family not aware of it at the time?

the photo below comes from a wonderful set of 40 pictures featured in the big picture series from the washington post. neil armstrong took the photo while being reflected in buzz aldrin's helmet. 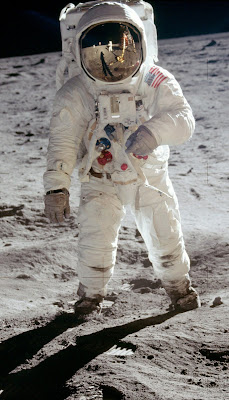 michael collins remained in the command module while the other two took the lunar module to the surface of the moon. when asked to describe his strongest memory of the Apollo 11 mission, he said:

"Looking back at Earth from a great distance.

I really believe that if the political leaders of the world could see their planet from a distance of 100,000 miles their outlook could be fundamentally changed. That all-important border would be invisible, that noisy argument silenced. The tiny globe would continue to turn, serenely ignoring its subdivisions, presenting a unified façade that would cry out for unified understanding, for homogeneous treatment. The earth must become as it appears: blue and white, not capitalist or Communist; blue and white, not rich or poor; blue and white, not envious or envied.

congratulations humanity on your 40th anniversary of landing on the moon - almost 400,000km away!!!

as far as our future endeavors go, i dont personally see a reason to bother going back to the moon and think we should set our sights a bit higher (and farther). but i'm thoroughly pleased to sit back, remember, and celebrate the amazing reality that human beings successfully explored our nearest neighbor in the universe, our moon, 40 years ago! 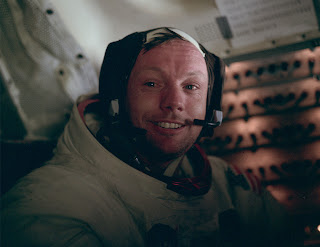 neil armstrong, just hours after 1st walking on the moon.

I love that quote. But it makes me wonder; if world leaders really could see that there were no borders, would it make them more angry with each other? Would they stop fighting, or would it get worse because they could actually see what they wanted the most? Hm...no idea.

Poor Michael Collins - destined forever to be the pub quiz question nobody can quite get!

I find it amazing to think that there are more people on earth too young to remember a moon landing than there are those of us whose minds were blown by it all. (The most mindblowing of all was the one that never made it - Apollo 13 - and being absolutely glued for hours to TV coverage of the return to earth, in which nothing much actually happened but it was gripping. Of course, some say the same about the cricket coverage in those days!

Awesome entry. I am also awed by the accomplishment of men.

What is it going to take to get to the next planet? Like going to the moon was at one time, it seems like something beyond our ability to concieve, yet what was once unbelievable happens each day. Most of it goes with out notice and accepted as routine.

Pehaps interplanetary travel will become as commonplace as traveling in an airplane.

When are they going to send someone to walk on the moon again? It's been 40 years!

You would love this book. I'll try to get it to you! http://www.amazon.com/Decide-Booklist-Editors-Choice-Awards/dp/0590483595

We didn't have TV, but I remember crackling and fizzing on the radio with voices muttering remotely and incomprehensibly through it.

I tend to start out thinking things like that, then decide it needs a little more careful thought, and end up frustrated that I can't do my own five-minute Decadal Survey, complete with cost-benefit analyses and all.

VagueofGodalming: The best reason for going back is the same reason people keep climbing Everest: because it's there, and because we can. That's my cat's philosophy of life and what's good enough for my cat is good enough for me!