this friday, august 1st, 2008, us earthlings will be treated to one of my favorite solar system shows: a total solar eclipse! lucky viewers in parts of canada, northern greenland, the arctic, central russia, mongolia and china will see this memorable event firsthand. the rest of us can sit comfortably in our jealousy as we watch the solar eclipse in real time, on NASA tv!! the peak is at 7:09 EDT, but tune in earlier to see the buildup to the event! 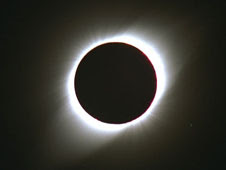 above is an image from the eclipse of oct. 24, 1995, taken in dundlod, india by NASA's fred espenak (aka mr. eclipse). below is an image of the shadow of the moon on earth as seen by the international space station 230 miles above earth's surface, during a solar eclipse in 2006! 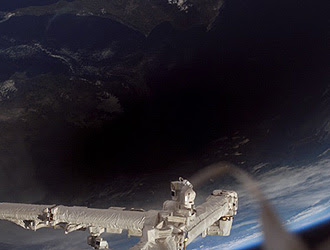 many people have commented to me over the years about the suspicious fact that we experience eclipses on the surface of the earth, implying there is some other significance to the alignment of our moon, the earth, and sun.

eclipses occur because the sun and the moon have the same angular size in our sky, even thought their physical sizes and distances from us differ greatly. the angular size of an object is how big it appears to be when we view it, which is dependent on the physical size of he object and its distance to us. a tall tree 10 meters away appears way taller than it does when we are standing 100 meters away from it.... but the tree is physically the same height! the phenomenon encompassed by the expression "angular size" is why cool tricks like "crush your head" work! 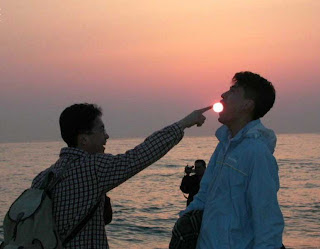 when the moon passes right in front of the sun from earth's point of view, the moon blocks the sun because the two have the same angular size! we call this a solar eclipse. for me, the purely coincidental accident for the object orbiting around us to have the same angular size in the sky as the object that we are orbiting around... is so soo fascinating and beautiful and simple, that its existence alone satisfies my cosmic curiosity without having to attach some other mysterious significance to the event. i appreciate it for what it is and try not to attach a more complicated and frivolous meaning that, in my opinion, distracts from its original beauty.

sometimes the simplicity of acknowledging how things physically came to exist is more fascinating and satisfying than attempting to create and apply a synthetic significance to them.