our moon and mercury

congratulations! everyone fared very well on this week's mercury or the moon game! without further hesitation... the bottom image in the game was mercury and the top was the moon! now its time to take a closer look at their similarities and differences between these two neighbors of ours.

could you tell the difference between them in the new images above? this time i think it's a bit easier because only the second image... the moon... reveals the sharp-edged darker regions called maria. the low-laying maria are flat planes that appear smooth in the image because they have fewer crater impacts.

there are a few maria visible on mercury, but they are small and not so defined. the striking brightness variations on mercury's surface might be caused by different things. 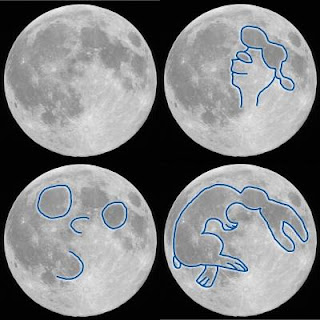 some people identify familiar objects on the surface of the moon based on the patterns resulting from the strong contrast between the dark maria, and the bright hilly highlands. i've never been able to find the man in the moon on my own. i think this phenomenon is somewhat subjective since people tend to find faces among patterns easily, but also because i'm always so distracted by the realization that the moon is a big huge rock flying around us in gigantic, predictable circles... that my eyes tend to not seek familiarity!

an obvious similarity between our two neighbors is their dense covering of impact craters. they both have large craters that are covered with smaller, younger craters. the fact that we can still see these craters tells us that neither object experiences strong storms caused by thick atmospheres, or lingering geologic activity. it appears to me from closer inspection of their surfaces, that mercury has more little tiny craters than the moon.

there are a couple very large impact sites seen on the moon. two of these seem much bigger than the largest impacts on the surface of mercury. the moon's largest impact craters also have large radial white lines shooting from them, caused by debris material thrown out at impact. i see some of these lines on mercury, but they are much fainter. i think this can be explained by mercury's higher surface gravity.

the planet mercury is larger than our moon. i can apply newton's law of universal gravitation to determine the relative strengths the gravitational forces one would feel on the surface of each orb...

if i'm sitting on mercury, then i say my mass is M1 in the equation above, mercury is M2 and the radius of mercury is r. I do the same thing for the moon and take the ratio of their F_. i discover that i weigh a little over 2 times more on mercury than i would on the moon! higher surface gravity means that the impacts on mercury did not throw debris as far as they did on our moon, and we see weaker white streaks coming out from each crater! it's interesting though that the brightest lines on mercury seem to radiate from very small impact craters.

what other differences do you see?

Based on the numbers I see for Mercury's and the Moon's mass and radius, I get that I would weigh a bit over twice as much on Mercury as on the Moon, not the nine times that you say in your post here.

But thanks for the beautiful pictures!

you're right josh... thanks! i should remember to check my math when i do it late at night ;) update made!

Nice post...another difference, which is also a function of g, is expressed in the apparent depths of the resulting craters. The crater rims are a bit higher (and the craters themselves deeper) on the Moon than on Mercury due to the higher g on the latter.

The slower rotation of Mercury also does funny things to the impact ejecta rays...

I recognize the overall appearance of the moon because of that "obvious" look of white and dark patches on it.