ever wonder what would happen if a super huge meteorite hit the earth?

this picture shows the "meteor crater" in arizona which is 180 meters deep and 1.2 km in diameter with an eroded rim standing 30-60 m high. this crater is believed to have been made 50,000 years ago by a 46-meter wide meteorite composed of nickel-iron rock. 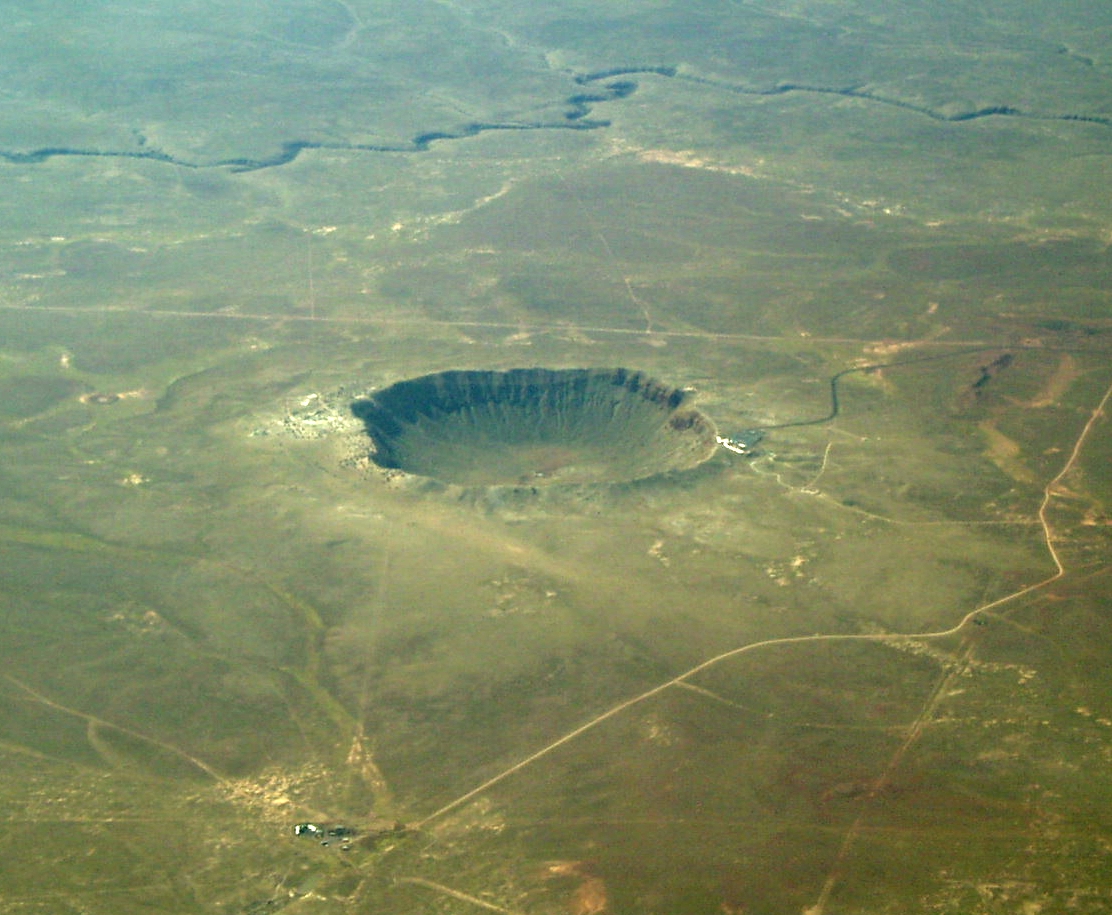 billions of objects enter earth's atmosphere everyday. they are mostly small things that burn up as they pass thru the atmosphere (we call these meteors). the objects that reach all the way to the earth's surface are called meteorites.

this video (7 min) shows a cool japanese-produced simulation of what could happen if a gigantic impact occured on earth....

i'm not intending to scare everyone by showing the fatal effects of that impact. in reality, an object that huge only hits the earth once every 100 million years or more. thats a very long time! the chart shows the frequency with which meteorites of different sizes are believed to reach earth.... and thats not even counting all the cosmic garbage!!

according to this chart, an impact like the one that made the meteor crater above should happen about every 5,000 years or so... and that one was 50,000 years ago! looks like we might be over due! good thing groups like the near-earth objects (NEOs) program and the Lincoln Near Earth Asteroid Research (LINEAR) program are constantly monitoring the skies in search of potentially approaching objects!!

wow, that was a cool animation. seeing Japan just get ripped up there, like a rug, ouch.

i was cheering "go, deep ocean vent critters!", but alas ... still, depending on the mega-tonnage of the object, they above any other Earth critter have the best chance of surviving.

i wonder whether an impact of this size would affect the orbit of the ISS?

one of the links from the NEO page you've listed above, NASA/JPL's portal, is also really good - check out the orbit diagrams.

however, sobering news recently that NASA seems to support deflection via lobbing a nuke at whatever comes too close. for other alternatives, check out Story Musgrave and Neil deGrasse Tyson, and recently i remember reading a theory proposed by recent NASA astronaut ala slow "towing" the NEO via gravity.

Hi, got to your blog from PZ Myers's blog, I think, and I saw the cool/scary impact animation, thanks. In reality, an object of the size shown in the animation (~100km) only hits Earth every few *billion* years (10^9 yrs), not every 100 Myrs...else we would not be here to tell about it! Such impact scenarios (almost complete planetary sterilization) were relatively common, say, 4-4.5 billion years ago. Cheers,