i've always thought the similarity between patterns found at gigantic scales and itty-bitty scales was fascinating!! here are two examples of spiral structure found in the universe. can you tell what they are? 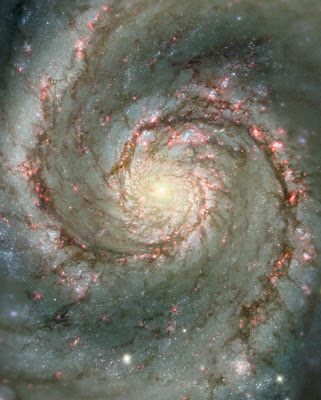 the spiral structure of the second image is probably familiar to most regular readers of this blog as belonging to a distant galaxy... in this case, the beautiful whirlpool galaxy (M51).

the first colorful image demonstrates the spiral structure of the very powerful hurricane hugo that swept thru the atlantic ocean in 1989.

they look amazingly similar, eh? a major difference being that hurricane hugo was a few hundred miles across, whereas the whirlpool galaxy is about 50,000 light years (300,000,000,000,000,000 miles) across and about 30 million light years away! the difference in physical scale is immense, but the logarithmic spiral patterns observed in their structure are nearly identical. 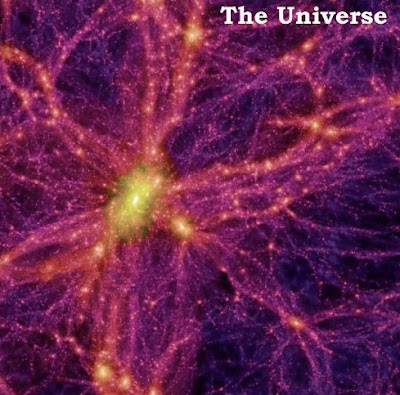 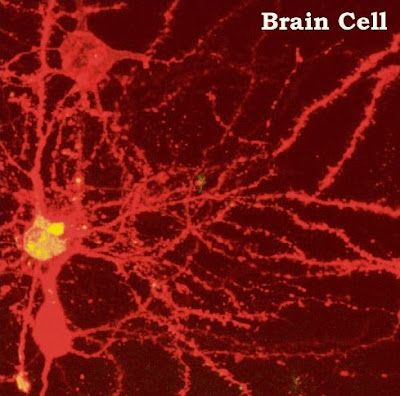 the first image shows large scale structures in the universe from a computer simulation. you can see the web-like structure of many many galaxies in the yellow-ish clusters, with filaments of galaxies, gas and dark matter connecting the large clusters.

the second image shows how particular types of neurons in the brain of a mouse connect to one another.

the overall structures look amazingly similar between these vastly different natural phenomena!! i find this especially amazing considering the size difference between these two phenomena is 22 orders of magnitude!!!

At first I thought that first photo was a heavily-modified photo of water going down a bathtub drain.

The second set of pictures is also remarkably similar to a road map.

You're not the first to notice this fractal nature of the universe. I recommend reading Stephen Wolfram's A New Kind of Science. If you can get past his self-aggrandizement, he's got some interesting ideas.

thanks for the reference! i read a little from his webpage and i'll be interested to read more when i have some time!

Also, I own that book and could not personally get past his self-aggrandizement. I wouldn't say he's got some interesting ideas as much as he claimed authority on a bunch of really good ideas that others have had. :)