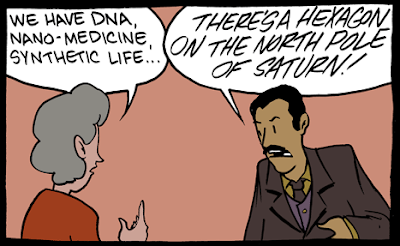 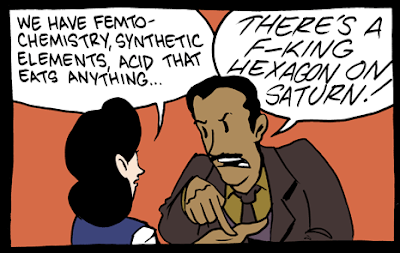 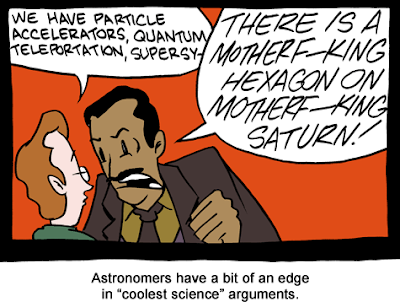 the hexagonal patterns around saturn's north pole were discovered by the voyager spacecraft flybys in the 1980s and quickly became mysterious phenomena. images taken by the cassini spacecraft since 2006 have shown how long-lived the hexagonal patterns in the clouds are, further extending the mystery. this image from cassini shows the thermal infrared glow (at 5 microns) of saturn's north pole: 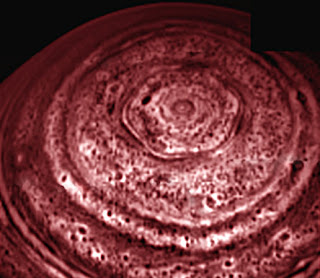 circles and a definite hexagon! strange.

since astronomical objects are so far away in space, it is rare that laboratory experiments on earth can test theories about the inexplicably strange aspects of the solar system we observe with our telescopes and spacecraft, because we can rarely recreate the conditions that exist elsewhere in the universe (temperature, size, density, etc...).

but, a recent study by physicists Ana Claudia Barbosa Aguiar and Peter Read of the University of Oxford in the United Kingdom, has produced hexagonal patterns similar to those observed around saturn's north pole by releasing dye into a 30-liter cylinder tank of water spinning on a table. inside the tank of water, they place a small ring that whirls more rapidly than the cylinder and produces a jet stream.

the video below shows their experiment (behold, actual science on youtube!!!):

The cartoon is freaking hilarious (as was your take on it!). The science, though, is freaking amazing. What I wouldn't give to be your age again, and be ready to experience all the wonderful discoveries your generation (and the next...) are going to make.

Thanks again for sharing this exciting stuff with us, Amanda!

that's completely awesome! I watched something on Saturn and they talked about the shape at the poles, neat to see how it's made!