the astronomist reminded me of a very interesting intersection between music and science: albert einstein was an avid violinist!

soon after i arrived in nottingham, i noticed a lecture advertised called "einstein's universe" that was to take place not at the university, but at the albert hall in town: 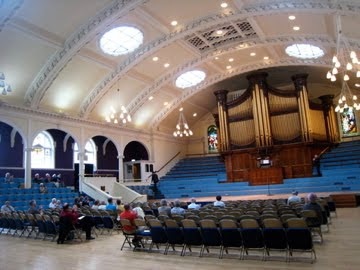 the presenters, oxford physicist brian foster and musician jack liebeck, would highlight "Einstein's science and his love of the violin." i was instantly intrigued and not disappointed one bit by the lecture and the performances! liebeck played beautifully at different points throughout the lecture and then they played a couple duets, with foster performing the parts that einstein often played with his musician friends.

here's a small video with interviews from both performers to give you an idea behind the lecture's inspiration.